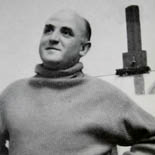 (image courtesy of Hanina Fine Arts)
Claude Venard was born into a business family from Burgognein, in 1913 in Paris. At the age of 17 he decided to become a painter and signed up at the École des Beaux-Arts, but he fled after only forty-eight hours as he found it did not suit him. Instead, he began to take evening classes in painting at the École des Arts Appliqués but after years of conscientious study, financial difficulties forced him to work as a restorer at the Louvre Museum, where he worked, restoring Old Masters for five years. In the event, this turned out to be beneficial to him as it enabled the young artist to fill the gaps in his artistic education.

From 1935 onwards Venard’s name began to figure in contemporary art exhibitions, both in France and abroad. Before he ever exhibited at the Salon de Mai in Paris, he had contributed to shows organised by the group of abstract artists, ‘Forces Nouvelles', along with Roger Humblot, Francis Gruber, André Marchand and Pierre Tal-Coat. However, the harsh trends followed by this group did not suit Venard, so along with a number of others he left the group to concentrate on his own work.

After serving in World War II, Claude Venard’s life was transformed. As his popularity developed, recognition gave him the chance to put his painting before anything else. Most of his subjects were still lives and landscape scenes but influenced initially by the Primatives, he then drew a lot from the work of Courbet, before moving onto the Cubists. As his style developed, his work became more abstracted and he began using increasingly linear patterning and flat patches of colour. After the 1950s he remained faithful to a post-Cubist compositional style, and progressively accentuated his pallet towards reaching the crudest of colours. He used these bold colours in very thick forms, sometimes applying them with a pallet knife.

Venard’s career was a happy one, punctuated by one man shows in Paris, London, New York, Philadelphia, Chicago, Dusseldorf, Munich, Buenos Aires, Tokyo, Canada, Belgium and Holland. He loved life in all its aspects and one is inclined to feel that he may have been in search of a genre of painting that would respond to all appetites.