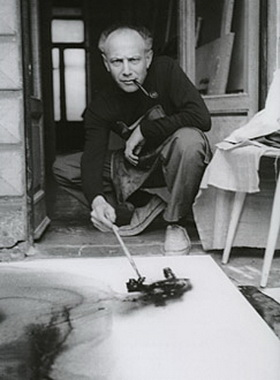 Enrico Donati was an Italian-American painter and sculptor. During his sixty-year career, he was associated with artistic movements such as Surrealism, Constructivism and Spatialism, but his fierce autonomy and artistic independence led him to defy any strict categorisation and experiment with different styles and mediums. After graduating from the University of Pavia and completing a course in musical composition at the Milan Conservatory, Donati moved to Paris to pursue his goal of becoming a composer. Although his musical ambitions ultimately failed, it was during his time in Paris that he first came into contact with Surrealist artworks and became fascinated by the eclectic collection of anthropological artefacts preserved at the Musée de l’Homme. During this period, he developed his artistic skills by studying at the traditional École de la rue de Berri. In 1939, Donati moved to New York, which was becoming a centre for artistic activity as a large number of European artists fled the war. Here, surrounded by artists, Donati’s career reached new heights.

In New York, while studying at the New School for Social Research, Donati befriended the Ecuadorian surrealist, Camilo Egas, who was director of the school’s art gallery. When Egas organised an exhibition of Donati’s paintings a few years later, one of the guests was none other than the acclaimed art historian and critic, Lionello Venturi. Venturi was instantly captured by Donati’s works and, in 1942, he introduced him to the founder of Surrealism, André Breton. Upon meeting Donati and seeing his work, Breton declared Donati a surrealist, elevating him to the likes of Marcel Duchamp, Max Ernst and Yves Tanguy. Breton famously stated, “I love the paintings of Enrico Donati as I love a night in May.” Breton would play an instrumental role in launching Donati’s career, including writing an enthusiastic preface for the catalogue which accompanied Donati’s third solo exhibition in New York. Donati later remembered finding Breton’s support overwhelming as a young artist; “I was just a kid but Breton accepted me into the surrealist movement. Suddenly I was surrounded by giants- Max Ernst, Tanguy, all of the big guys.”

While Donati cut his professional teeth in Surrealist circles, his style and practice underwent a significant change in 1947 following the demise of Surrealism. During this phase, Donati experimented with geometric, coloured shapes and straight lines. Despite their structured compositions, the meaning of these geometric canvases was as elusive as his surrealist works. In keeping with the Surrealist manifesto, they were insights into his subconscious, or to borrow Breton’s words, “pure psychic automatism.” Art historian Martica Sawin highlights the simultaneously captivating and inexplicable nature of these artworks; ‘Perspectives shift and cancel one another; transparent planes turn inexplicably opaque; exquisite little details of colour draw the eye like jewels. There is much that is suggestive and provocative, but the paintings remain singularly unyielding to the seeker of rational explanation.’ Donati never yielded to demands for an explanation of his works, claiming that his paintings were as much of a mystery to him as they were to the viewer.

Donati first experimented with texture in the 1950s, when he discovered that by combining the dirt from vacuum cleaners with glue and paint, he could imitate organic materials or the surface of the moon. Indeed, when Duchamp saw these richly textured canvases, he christened them Donati’s ‘Moonscapes.’ This new series shared some characteristics with the emerging artists of the New York School such as Mark Rothko, particularly their large scale, dark hues, and understated compositions. It was not long before Donati joined the Betty Parsons Gallery and exhibited alongside the avant-garde American artists of the time, including Rothko, Barnett Newman and Theodorus Stamos.

In 1960, Donati opened a stone that he had found on a beach in Dover eleven years earlier, to find a fossil inside. He was so inspired that he devoted his largest series of works to fossils. For him, fossils represented the ‘cycle of creation, destruction and rebirth…the fossil contains within itself all the mystery, power and indestructibility of life.’ He would imitate the unique markings of fossils by gluing sand onto the surface of his canvases and scratching inscriptions into the surface of the sand, reminiscent of petroglyphs and Neolithic cave art. Although Donati only came to his fossil series later in life, he claimed that the fossil “had always been my true myth and metaphor, my guide from the very beginning of my career.”

Over the course of his long and fruitful career, Donati’s extremely personal works, no matter what artistic movement he was associated with at the time. Today, his work graces the collections of celebrated institutions such as the MoMA, Guggenheim, Whitney Museum of American Art, Museum of Fine Art of Houston, Galleria Nazionale d’Arte Moderna in Rome, and the Musées Royaux des Beaux-Arts de Belgique.
Read more