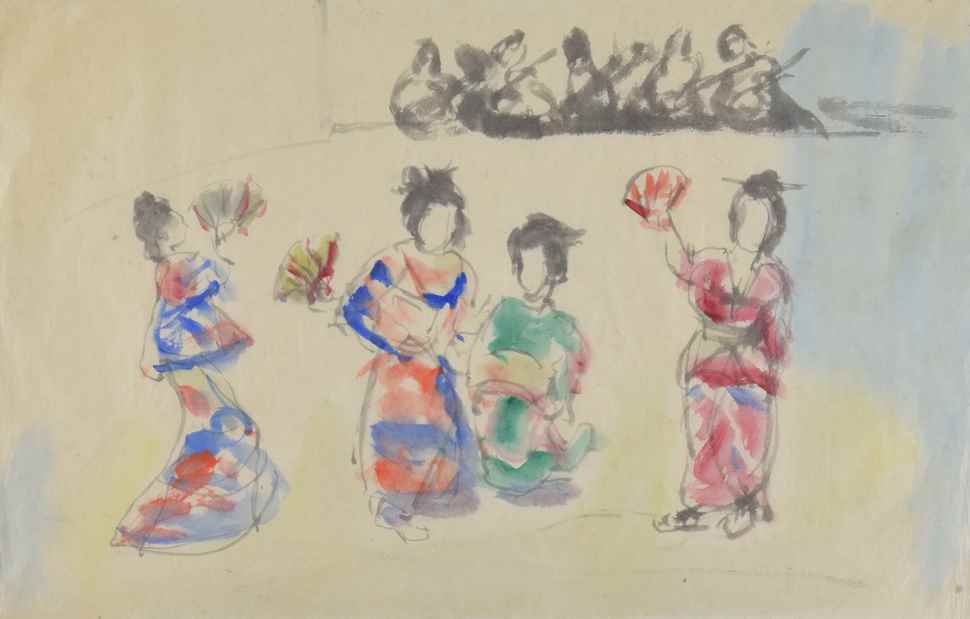 Born at Kremenchug in Ukraine to an orthodox Jewish family, despite his father’s wish he become a rabbi Emmanuel Mané-Katz moved to Paris in 1913 and enrolled at the École des Beaux-Arts. A year later, upon the outbreak of the First World War, he moved to St Petersburg where he continued painting and briefly exhibited. After the Revolution of 1917, Mané-Katz returned to his birthplace and taught art until 1921 when he one more returned to Paris. There he became friends with Pablo Picasso and was affiliated with an art movement known as the Jewish School of Paris.

Mané-Katz’s style of painting was initially static, classical and somber, but his palette changed in later years to include bright, primary colours, loose brushwork and rhythmical forms. Although Mané-Katz painted a number of landscapes and flower studies, Jewish themes became his artistic emphasis. His oil paintings feature Hassidic characters, rabbis, Jewish musicians, beggars, yeshiva students and scenes from the East European shtetl. In 1931, Mane-Katz's painting The Wailing Wall was awarded a Gold Medal at the Paris World’s Fair. A particularly well-travelled man, between 1928 and 1937 Mané-Katz visited Egypt, Palestine and Syria. His first trip to the then-British Mandate of Palestine was in 1928 and thereafter he visited the country every year. Indeed, Mané-Katz said his temporal home was in Paris but that his spiritual home was in Israel. In 1939 he volunteered for the French army and was taken prisoner; upon his release he moved to the United States where he spent the rest of the Second World War, only returning to returning to Paris in 1945.

In 1953 Mane-Katz donated eight of his paintings to the Glitzenstein Museum at Safed in Israel. He later bequeathed his paintings and extensive personal collection of Jewish ethnography to the Israeli city of Haifa. Four years before his death, the Mayor of Haifa provided him with a building on Mt. Carmel to house his work, which later became the Mané-Katz Museum. The permanent exhibit there includes Mane-Katz's oil paintings (demonstrating a progressive change in style over the years), a signed portrait of the artist by his friend Pablo Picasso (1932) and a large collection of Jewish ritual objects.

Mané-Katz’s work features in several international private collections and the national collections of Tate Britain in London, the Museum of Modern Art in New York City and the Museum of Art at Ein Harod in Israel.