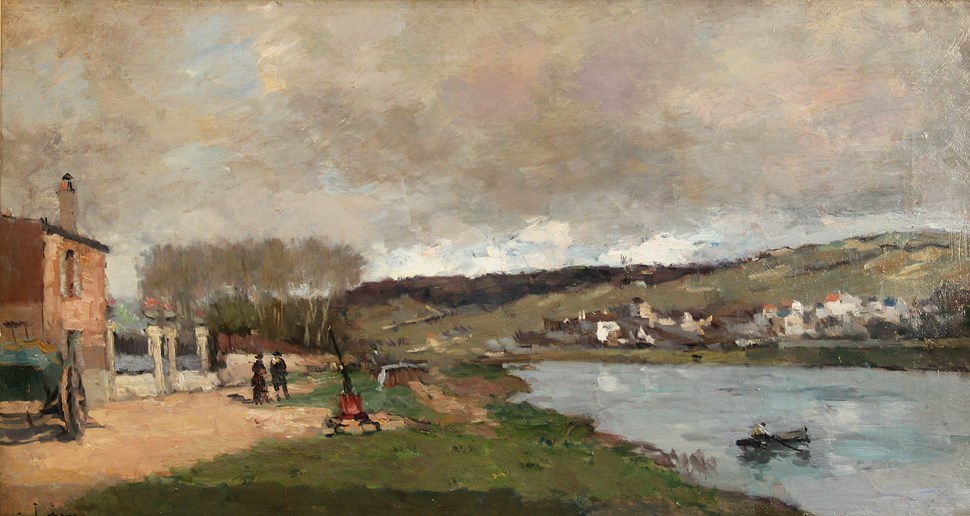 Albert Lebourg (né Albert-Marie Lebourg) was born on 1 February 1849 in Montfort-sur-Risle, about 17 miles southwest of Rouen, France. He studied at l'École des Beaux Arts and at l'Academie de Peinture et de Dessins in Rouen, before becoming a student at the architecture studio of J.P. Laurens in Paris.

After meeting the famous collector, Lapelier, in 1872, Lebourg became an art teacher at l'École des Beaux Arts in Algeria. Apart from one visit to Paris, when he got married on 8 September 1873, Lebourg lived in Algeria until 1877, and there met a painter from Lyons called Seignemartin. Under Seignemartin's influence, Lebourg's paintings grew increasingly Impressionist in style (The Admiralty (1875), Arab fantasia (1876) and Moorish cafe (1877)).

In the Fourth Impressionist Exhibition of 1879, Lebourg exhibited thirty works with Claude Monet, Camille Pissarro and Edgar Degas, including paintings and drawings executed in Algeria. In the Fifth Impressionist Exhibition of 1880, he exhibited twenty works depicting Rouen, Paris and Algiers. He was admitted to the Salon in Paris in 1883 with a work entitled Matinée à Dieppe. In 1887 he exhibited at the acclaimed Les XX exhibition, with Walter Sickert, Camille Pissarro, Berthe Morisot and Georges-Pierre Seurat.

Lebourg became a member of the Société des Artistes Français beginning in 1893. He moved to the Netherlands in 1895, where he would stay for two years. He exhibited to great acclaim at the Mancini Gallery in Paris and won the Silver Medal at the Exposition Universelle in 1900. In 1903, a retrospective exhibition on him was organised, presenting a hundred and one works at the Gallerie Rosenberg, the art gallery of Paul Rosenberg at 21 rue de la Boétie in Paris.

On 13 November 1909, the Musée des Beaux-Arts de Rouen opened a show with fifty-two paintings, thirteen by Lebourg. Then in 1918, in the same museum, Lebourg was represented with Bonnard, Boudin, Camoin, Cross, Guillaumin, Luce, Matisse, Monet, Signac, Vuillard and Pinchon. In the same year, another retrospective on him was organised in Paris.

Lebourg was named Chevalier of the Legion of Honour on 27 June 1903 and breveted Officer of the Legion of Honour 22 April 1924. A catalogue raisonné of two thousand one hundred thirty-seven works was published in 1923. His works are exhibited at the Musee d’Orsay, Petit-Palais and Carnavalet in Paris, as well as museums in Bayonne, Clermont-Ferrand, Le Havre, Dunkerque, Lille, Strasbourg, Sceaux and in Rouen at the Musée des Beaux-Arts de Rouen (Depeaux collection).

In September 1920, Lebourg suffered a stroke that paralysed the left side of his body. He nevertheless remarried in February 1921. Lebourg died in Rouen on 7 January 1928.