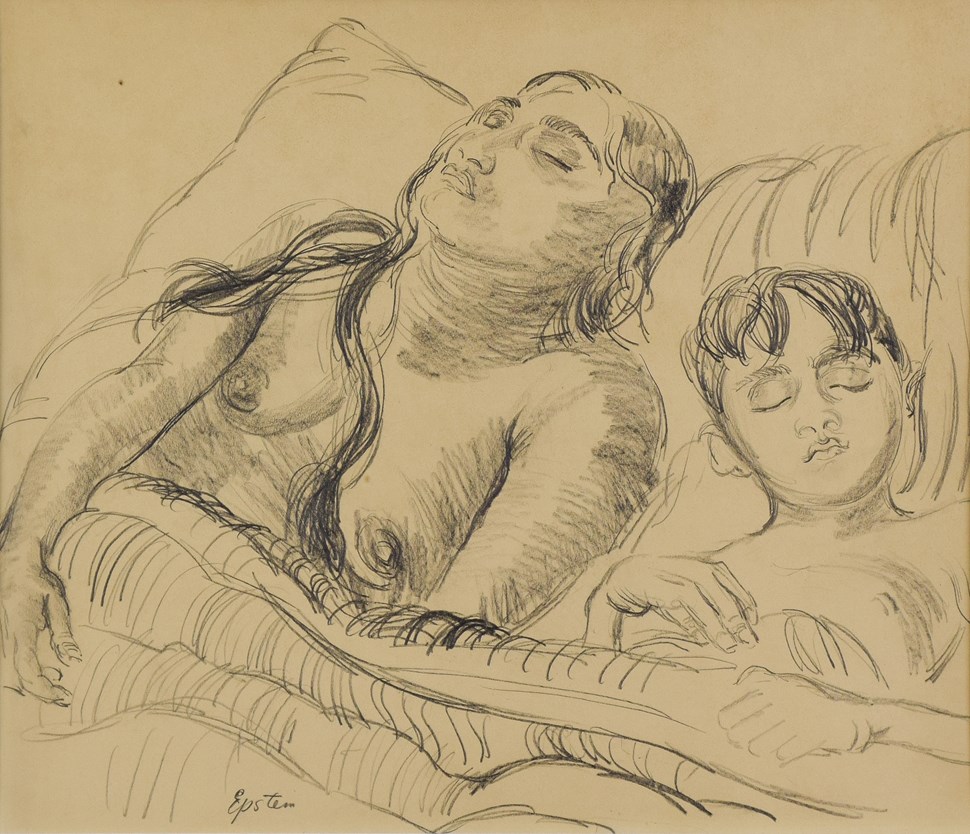 Sunita and her son

American-born Polish-Jewish artist Jacob Epstein studied at the Art Students League in New York City, École des Beaux-Arts and Académie Julian in Paris. Settling in London in 1905 and becoming a British citizen, Epstein was a modernist sculptor, painter and illustrator who gained direct inspiration from the authentically rough-hewn, so-called primitive, art found in the British Museum.

A founding member of the bohemian London Group of artists in 1913, Epstein’s first solo exhibition occurred that year at London’s Twenty-One Gallery. Briefly associated with the short-lived Vorticist movement Epstein’s striking Rock Drill (1915) is featured in the collections of Tate Britain. Serving in the ‘Jewish Regiment’ of The Royal Fusiliers, from 1916 England became his permanent and lifelong home.

Epstein’s public sculptures (his first in 1908 being the eighteen nudes upon the facade of The British Medical Association on London’s Strand) initially shocked the British public because of their explicit sexuality modelled in diversely exotic forms, drawing not upon the European Greek tradition but upon the folk and religious traditions of ‘colonial’ peoples in, for example, India and Africa. Another controversial early commission was the tomb of Oscar Wilde in Paris’s Père Lachaise Cemetery condemned by the French authorities as ‘indecent’ enough to be covered in tarpaulin. One of Epstein’s significant commissions came in 1928 and involved sculpting the head of African-American film star Paul Robeson, whilst future commissions included busts of Albert Einstein (1933) and Sir Winston Churchill (1947). Many of Epstein’s fine bronzes are held in London’s National Portrait Gallery, his sculptural legacy particularly influential upon the next generation of modernist British sculptors such as Henry Moore and Barbara Hepworth. Epstein also painted: many of his little known watercolours and gouaches depicted ancient Epping Forest where he lived and worked and were often exhibited at the Leicester Galleries in London. A year before being knighted by Queen Elizabeth II, the Arts Council of Great Britain granted Epstein a 1953 retrospective at London’s Tate Britain in 1953.

Despite marriage to Margaret Dunlop in 1906, Epstein had several mistresses who bore him his five children. After Margaret’s death in 1947 he married Kathleen Garman after their daughter Kitty married the artist Lucien Freud (1948) with whom she later had two daughters.