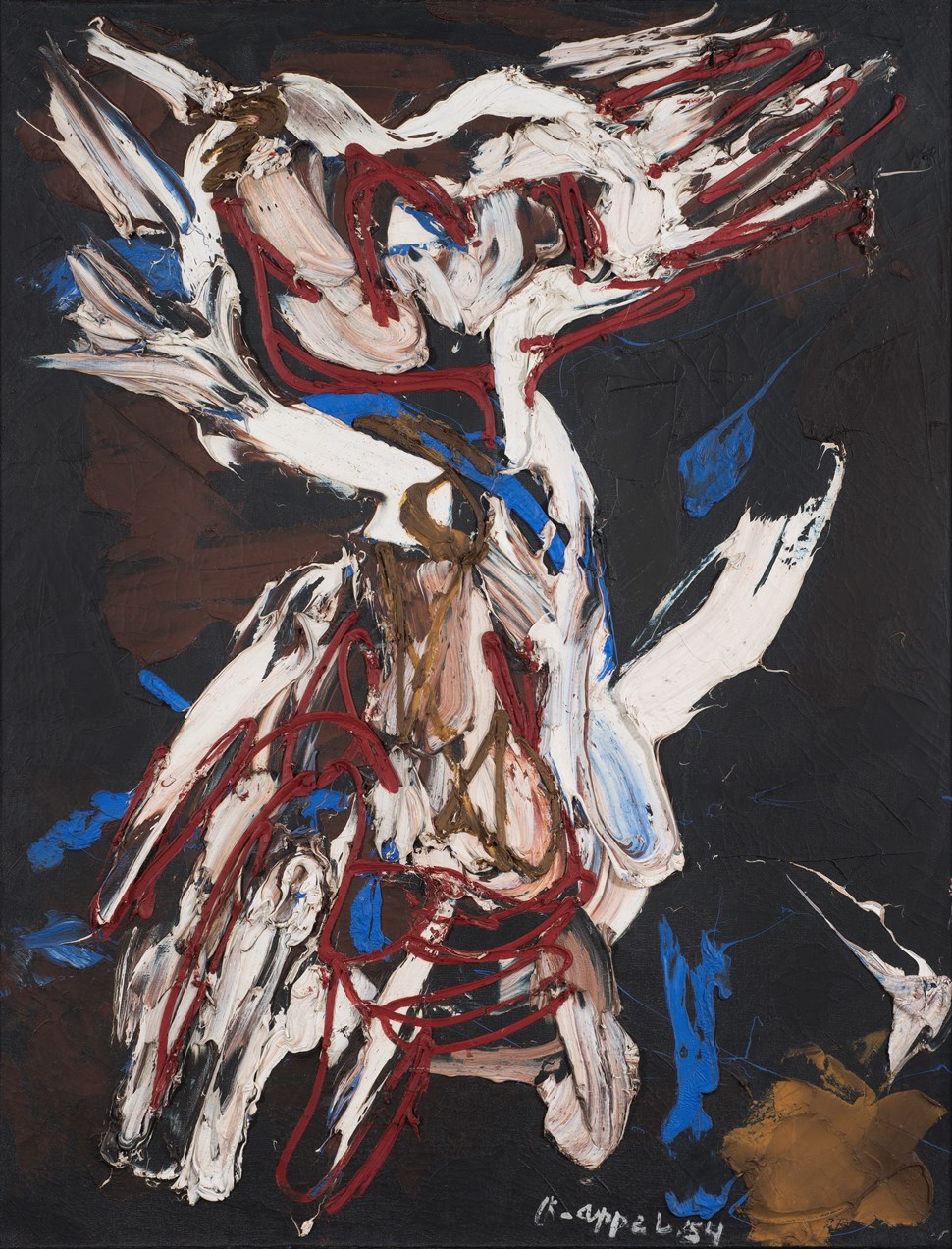 Dutch painter and sculptor, Karel Appel started painting at 14 and went on to study at the Rijksakademie van Beeldende Kunsten in Amsterdam between 1940 and 1943. There he met Corneille Guillaume Beverloo and Constant Anton Nieuwenhuys, with whom he would later found the avant-garde movement CoBrA in 1948.

While Appel had his first solo exhibition in Groningen in 1946, it was in the CoBrA group that he was most active during the 1950s. CoBrA was an acronym for Copenhagen, Brussels and Amsterdam, the cities from which the founders came. The CoBrA artists rebelled against the De Stijl movement which was widespread in the Netherlands at the time. In response to the geometric forms of the De Stijl movement, the CoBrA group created abstract paintings with fluid, spontaneous brushstrokes and vivid colours. In 1949, Appel took part in an exhibition at the Stedelijk Museum in Amsterdam alongside other CoBrA artists. The exhibition created a huge scandal in the press and amongst the public. Likewise, Appel’s fresco in Amsterdam’s city hall, named ‘Questioning Children,’ 1949, was poorly received and was covered up for ten years. While the new art of the CoBrA group was unappreciated in the Netherlands, and its members only exhibited together during the 1950s, years later it finally achieved recognition, being credited with the rejuvenation of Dutch modern art after the war.

Fleeing the controversy caused by CoBrA in the Netherlands, Appel moved to Paris in 1950 and travelled widely. He soon embarked on a successful solo career, beginning with a solo show in 1953 at the Palais des Beaux-Arts in Brussels. In 1954 Appel received the Unesco prize at the Venice Biennale, and the same year his first American exhibition opened at the Martha Jackson Gallery. A year later his painting ‘Child and Beast II’ (1951), was included in an influential exhibition at the MoMA, “The New Decade,” alongside several other European painters and sculptors, including Francis Bacon, Jean Dubuffet and Pierre Soulages.

What distinguishes Appel as the most famous of the Dutch CoBrA artists is his painterly style and his use of frenetic brushstrokes and vibrant colours. He claimed that “the material is the paint itself. The paint expresses itself. In the mass of paint, I find my imagination and go on to paint it.” In his early works, Appel was especially theatrical in his application of paint. He would squeeze out the contents of his paint tubes, piling it high onto a palette knife, which in turn served to propel the paint onto the canvas. The action of applying paint was, for Appel, a physical activity. The violent motion of launching paint onto the surface of the canvas resulted in his characteristically wild paintings. Indeed, he described his method by explaining; “my tube is like a rocket, which describes its own space.” He would direct the movement of the paint with his hands, resulting in a thick, viscous texture and an almost sculptural feel. Appel also explored other media, including textiles, ceramics, stained glass, sculpture and print-making.

After 1990, Appel became much more popular in the Netherlands, and in 1995 a museum dedicated to the art of the CoBrA group was opened in Amstelveen. Appel’s works have featured in major museums across the globe, including the MoMA, the Guggenheim Museum, the Museum of Fine Arts in Boston and the Tate Gallery in London. In 2001, to celebrate Appel’s 80th birthday, three coordinated exhibitions of his work were organised across Holland, at the Stedelijk Museum Amsterdam, the Gemeentemuseum Den Haag, and at the CoBrA Museum in Amstelveen.