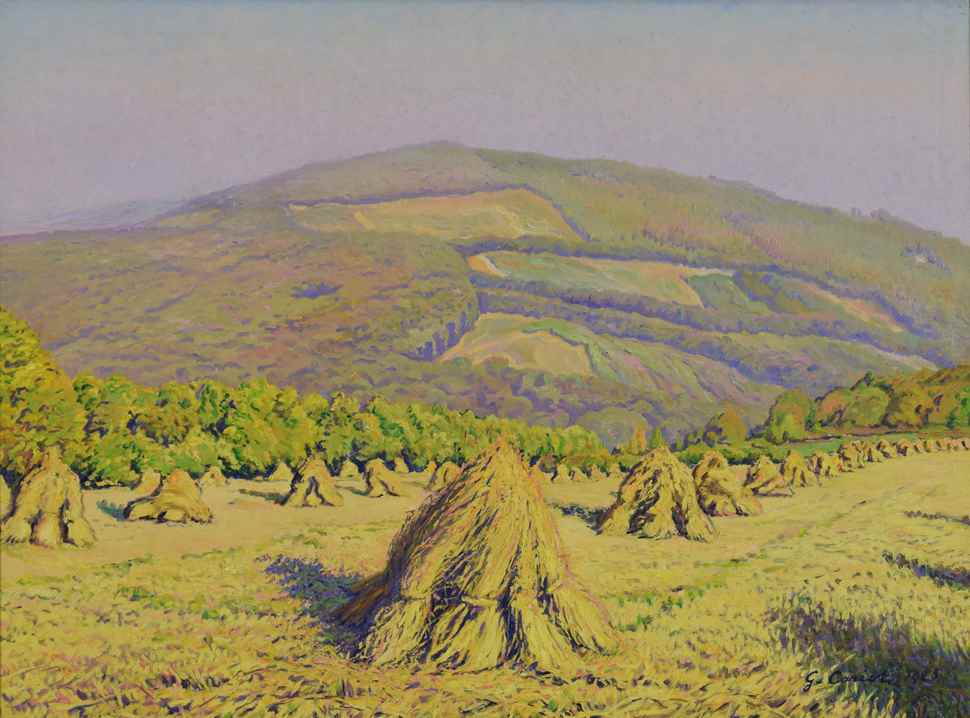 Gustave Camille Gaston Cariot was born in 1872 in Périgny-sur-Yerres near Paris but grew up in the Marais district of Paris, an area famously associated with artists and artisans. His father was a luggage-maker and hoped that his son would continue his trade and join the family business, but from a young age, Cariot had demonstrated a natural artistic talent and shown an interest in pursuing an artistic career. While carrying out an apprenticeship with his father, Cariot dedicated his free time to studying design and producing sketches of his native Paris and the surrounding countryside. Despite being a self-taught artist, Cariot went on to become a celebrated Post-Impressionist painter.

Although Cariot never accepted the label of Neo-Impressionist, he was clearly drawn to the scientific theory and techniques of the Pointillists and Divisionists. Indeed, he is best known for his pointillist works, which reveal his awareness of the Divisionist use of brushstrokes and colour theory. Cariot enjoyed exploring divisionism’s ability to communicate the luminescence and mutability of light and colour. Alongside his use of these techniques, Cariot also developed his highly personal and unusual technique. His landscape and cityscape paintings are largely characterised by their vivid palette which gives his works an internal luminosity and his use of a thick impasto, which is meticulously applied to give his compositions a greater sense of depth and three-dimensionality. Using this hybrid technique of Pointillist and Divisionist theories and his own unique style, Cariot’s work vividly captures the myriad effects of light as it falls on trees and rivers and emanates from clouds.

Cariot was also influenced by the themes and subjects the featured in many Impressionist paintings, especially pastoral scenes of the French countryside, such as Monet’s 1890-1891 haystack series and Van Gogh’s undulating cypress trees, as well as famous landscapes of his native Paris. Cariot painted several series of works in Paris that feature iconic landmarks at different hours of the day and in different seasons, including the Pont-Neuf from various perspectives. It was his aim to capture and document the many shifting faces of a single view, much in the same vein of Monet’s studies of the Cathedral at Rouen. His oeuvre is largely dominated by charming countryside scenes and romantic views of Parisian rooftops and the River Seine in different seasons. After World War I, Cariot spent most of his time in Germany, and while there painted a large number of landscapes of the Rhineland.

During his lifetime Cariot gained critical success for his work. His landscapes and Parisian cityscapes often featured in the exhibitions of the prestigious Société des Artistes Indépendants, Société Nationale des Beaux-Arts, as well as the Salon d’Automne and Salon d’hiver. In 1909, Cariot exhibited with La Société Moderne, a group established by the painter Emmanuel de la Villéon and often exhibited at the Galéries Durand-Ruel in Paris.