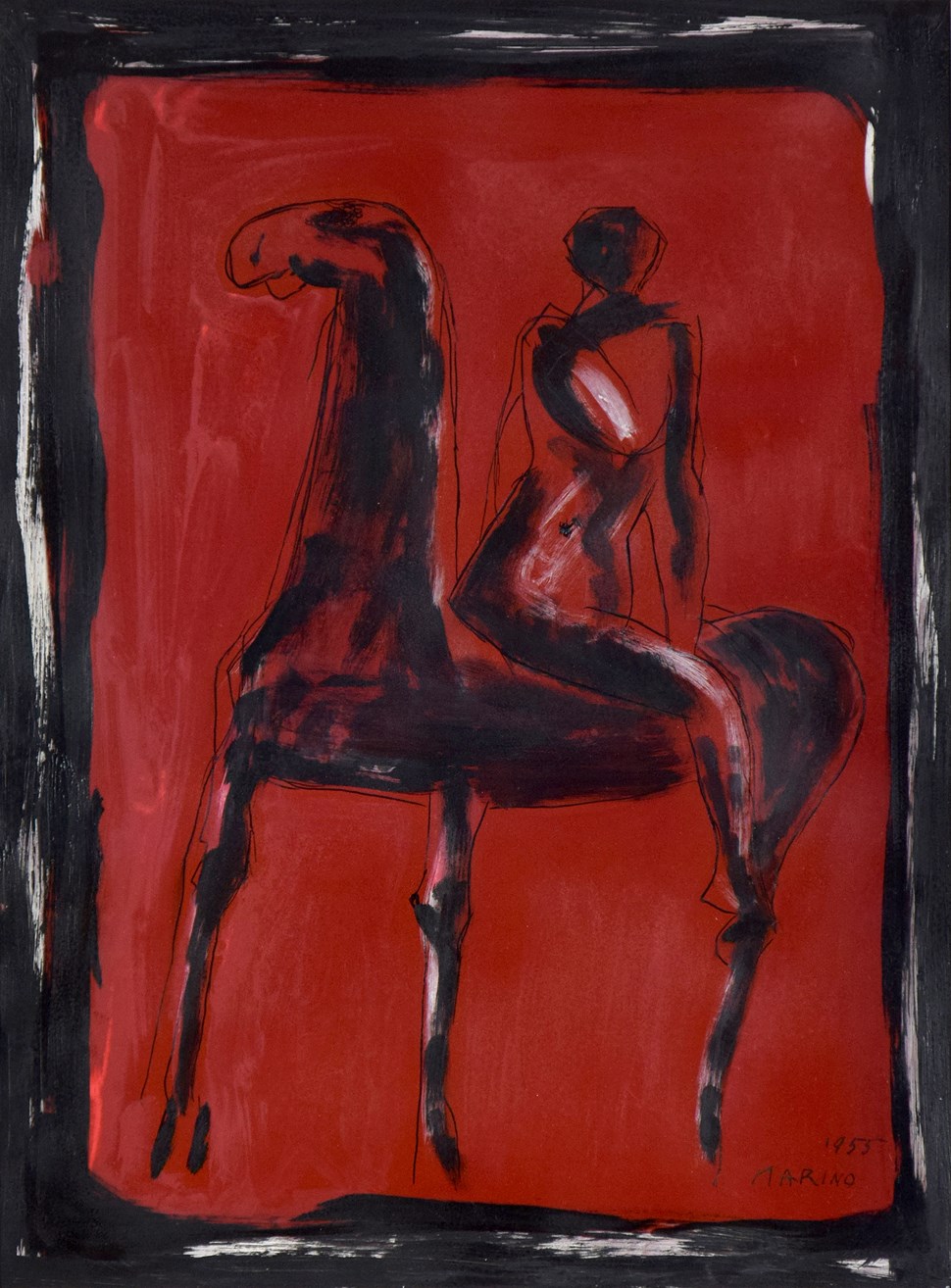 Born in Pistoia, Marino Marini was an Italian sculptor, painter, lithographer and etcher, who drew on the traditions of Etruscan and Northern European sculpture in developing themes of the female nude, dancers and jugglers, the portrait bust, and the equestrian figure.

Although primarily known as a sculptor, Marini studied painting and sculpture at Florence Academy, and until 1928 worked mainly as a painter and engraver. His early engravings, dating to the beginning of the ‘20s, show a certain influence of Secessionism unswayed by the aesthetics he was surrounded by; these images demonstrate that he wasn’t influenced by the echoes of Futurism and Cubism that in Florence still had a public following and a good number of supporters. Instead, following the lead of Piero della Francesca and Masaccio, masters of freshness and simplicity, Marini called himself a descendant of the Etruscans. According to Guido Giuffrè, this sensibility allowed Marini to “turn tradition into modernity unlike anyone else in the twentieth century.”

Marini succeeded Arturo Martini in 1929 as professor of sculpture at the Villa Reale School of Art at Monza, near Milan. From 1930, he made frequent visits to Paris, where he met Gonzalez, Maillol, Picasso, Braque and Laurens, as well as Campigli, de Chirico and other Italian artists resident there. His first one-man exhibition was at the Galleria Milano of Milan in 1932.

At the 1935 Rome Quadriennale, Marini was awarded first prize for sculpture, although his most meaningful theme of the equestrian figure first appeared in in a bas-relief sculpture from 1936. While travelling through Germany in 1934, Marini had been inspired by the medieval equestrian statue of a knight in the Cathedral of Bamberg. The subsequent evolution of this theme reflected Marini’s changing context, leading up to and beyond the violent years of the Second World War.

At first, Marini’s knights were calm and poised, balanced in their soft lines and solid figures. The proportions of the horse and rider were relatively slender. By 1937, the horse rears and the rider gestures. In 1940, as Marini was appointed professor at the Brera Academy, Milan, the forms become simplified and more archaic in spirit, and the proportions become squatter. In some pieces, the bond between knight and horse became symbiotic, as if the artist wanted to melt the bodies into the representation of a centaur.

“My equestrian statues,” said the artist in 1972, “express the angst caused by events of this century; my horse’s uneasiness is getting stronger with each new piece, the knight is more and more exhausted, he has lost his power over the beast and the catastrophes he succumbs to are similar to those that destroyed Sodom and Pompeii. I strive to let the last stage of dissolution of a myth be visible, the myth of heroic and winning individualism, the humanists’ myth of a man-of-virtue.”

Marini lived in Switzerland from 1943 to 1946, chiefly at Tessin, where he was in contact with Richier, Wotruba and Giacometti. He returned to Milan in 1946. By the late 1940s, the horse in his work appears planted immobile with its neck extended, strained, ears pinned back, and mouth open. However, his horses and riders took on a more dynamic character in 1950, part of which he spent in New York.

A contrasting theme Marini explored was the pomona, “of a full-bodied humanity, of abundance, of great sensuality. The [pomonas] represent a joyful season that is broken by tragic wartime”. Of these sculpted goddesses, Marini said, “Shaping the figure that is more and more united, static and at the same time free and untied, I try to delve into volumes. But in the meantime this search for volumes isn’t the sculptor’s only purpose, he must never forget that what really moves in sculpture always is its poetry. “

From 1948, Marini made many paintings, some colourful and almost abstract. He was awarded the City of Venice prize for an Italian sculptor at the 1952 Venice Biennale.