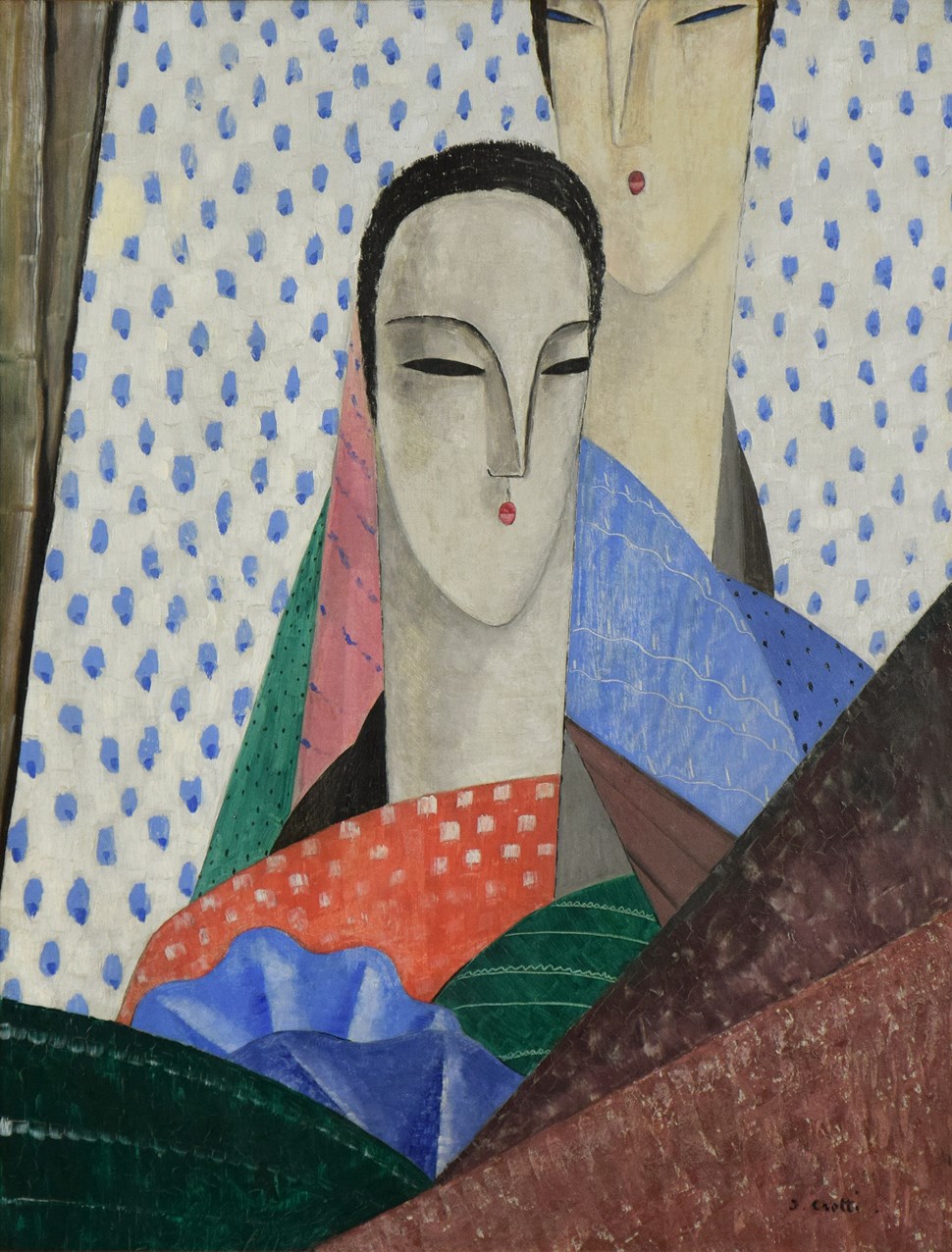 Jean Crotti was born in Bulle, Switerzland. His first formal artistic education was to occur within the walls of the Munich School of Decorative of Art in 1898 before he moved to Paris in 1901 to attend the famed Académie Julian. His tutelage at the Académie did not last and he abandoned his studies there in 1902. The reasoning for this departure was largely due to Crotti becoming disenfranchised by the rigours of painting within a controlled academic environment. The period that was to follow was largely dominated by Crotti painting in isolation and his output was characterised by its Primitivist and Fauvist aesthetics. In 1907, Crotti started exhibiting his works regularly within major public exhibitions, such as the Salon des Indépendants and the Salon d’Automne.

After these initial dalliances with the Primitivist and Fauvism, in 1912 Crotti became influenced by Cubism and Orphism. This shift toward Orphism brought Crotti into close proximity with the Section d’Or, which comprised of notable figures such as Marcel Duchamp, his brothers Raymond Duchamp-Villon and Jacques Villon (Gaston Duchamp), Francis Picabia, Robert and Sonia Delaunay and Guillaume Apollinaire.

Crotti alongside his wife Yvonne Chastel fled Europe for New York in 1914 - much like a great many of his fellow artists - to escape the cauldron of the Great War that started to consume Europe. It was soon after this migration to America, that he was to meet Suzanne Duchamp, the sister of Marcel, Raymond and Jacques Villon Duchamp. During this New York period, he shared a studio space with Duchamp and Picabia, which had the effect of compounding the relationships between the three that had been established in Paris. The group also produced the highly influential avant-garde publication “291” during this period. It was not long after his move to New York, that Crotti’s aesthetic shifted yet again, this time towards Dadaism. The catalyst of this can largely be attributed to his sharing of studio space with the two aforementioned and the War that was ravishing the world. These new works were exhibited within New York’s Gallery Bourgeois and the Montross Gallery. It was around this period that Crotti created Les forces mécaniques de l'amour en movement (1916), which is considered to be one of the earliest Dadaist works using found objects.

In 1916, Crotti returned to Paris and shortly afterwards he divorced his wife, for a one Suzanne Duchamp. The pair married in 1919 and were to remain so until his death. This marriage proved to be extremely fruitful artistically, with the pair starting a two-person artistic movement which they called Tabu. Largely characterised by its similarities to Dadaism, it differed slightly in that Crotti was to add a quasi-religious element to his movement, within which he attempted to explore notions of the metaphysical and the subconscious, ideas which were to later inspire the Surrealists. In 1921 Dadaism had well and truly arrived within Paris. Crotti was to feature extensively within the Dadaists exhibitions and publications during this time until their flame was extinguished. He also contributed to Tristan Tzara’s unrealised dream of Dadaglobe.

In the 1930s Crotti developed a new technique for creating art, dubbed ‘gemmail’. The process involved creating post-cubist compositions from shards of glass that were intended to be illuminated from behind.

Crotti never became stagnant within his career, and his oeuvre shows that he experimented with a great many styles throughout his life. This lack of signature style has largely made Crotti resilient to being comfortably placed within a specific niche within the history of art and thus has made him an artist of extreme interest.

After Crotti’s death, his heirs donated a great swathe of his personal collection of letters to the Archive of American Art, Smithsonian Institute, Washington D.C. This collection contains correspondence between Crotti and numerous champions of the avant-garde, such as Francis Picabia, Jean Cocteau, Henri Matisse, Raoul Dufy, Pablo Picasso.

Crotti’s works can be found hanging in a great many prominent public and private collections, such as Tate Modern, London; MOMA, New York; The Metropolitan Museum of Art, New York. His works have also been exhibited in notable exhibitions such as Tabu Dada: Jean Crotti and Suzanne Duchamp, 1915-1922, Philadelphia Museum of Art (1983-84).