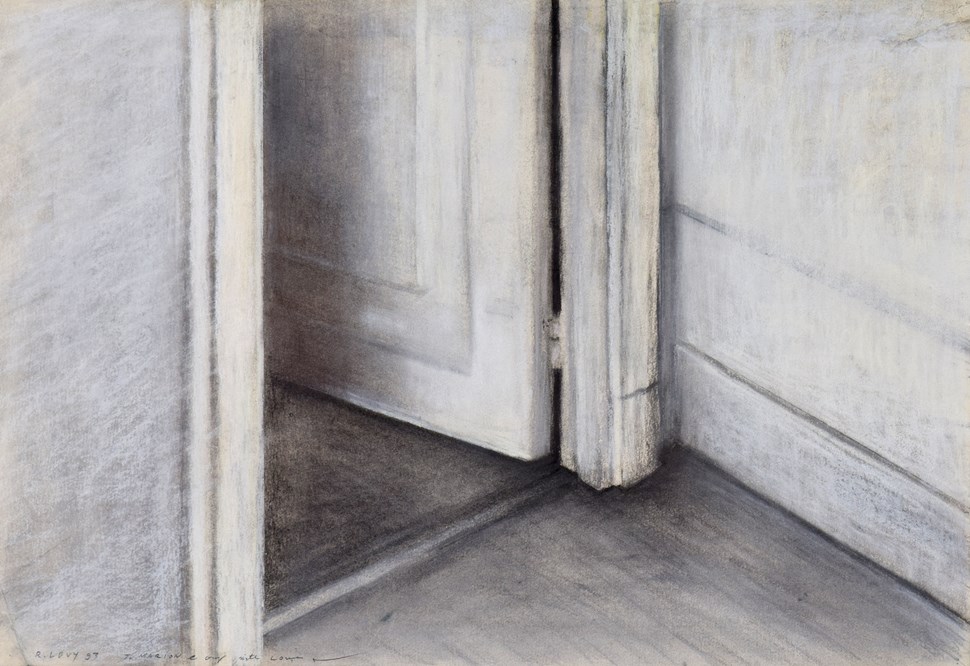 Ra’anan Levy is an Israeli painter currently living between Paris and Florence. Born in Jerusalem in 1954 to Syrian-Jewish parents, Levy began his artistic training at both the Academy of Fine Art in Rome and Florence between 1975 and 1978, while simultaneously studying at the Santa Reparata Graphic Art Centre in Florence. In 1979 Levy returned to Jerusalem, where he studied at the Hebrew University, in the Department of General History and the History of Muslim Countries. In 1982, he returned to his artistic endeavours when he was awarded a two-year-long artist-in-residence fellowship at the Rijkakademie van Beeldende Kunsten in Amsterdam, during which he focused mainly on print-making. Levy subsequently received a grant from the Fondation de France in 1987 and decided to move to Paris, where he continues to work today.

Levy’s international experience and perspective is reflected in his work. During his time in these places, he had the opportunity to engage with a wealth of different art and artists. This is demonstrated principally by his wide range of artistic influences, from the masters of eighteenth and nineteenth century French painting such as Ingres and David, to the Dutch Masters, Rembrandt, Hals and Vermeer, the artists of the Italian Renaissance, as well as Middle Eastern Antiquities. Although Levy principally choses to portray seemingly mundane objects and settings, he does so in a figurative style, in which we can clearly see the influence of Old Master techniques. Whatever the medium or the subject, Levy’s approach to painting is meticulous. In his engravings, pastels or oil paintings, whether depicting a face, a still-life, or his own back garden, the artist employs a confident technique so that each marking or brush stroke appears deliberate and controlled.

Ra’anan Levy’s oeuvre has advanced in series. The first of these series was his 1976 ‘Sink Canvases,’ followed by, ‘Sewer Drains, Common Objects, Spaces.’ In these collections of paintings, the artist was principally interested in capturing the emptiness and space of vacant interiors and depicting everyday objects. By depicting everyday objects and ordinary spaces, Levy invites us to consider that there is more to these things than what meets the eye. An empty apartment, for example, is transformed into a labyrinth of intersecting lines. In his interior scenes, the artist frequently isolates certain details, such as the floor boards or the corner of a door frame, which gives the viewer the impression that we are being guided somewhere unknown. In the absence of any human figures in these empty spaces, the viewer begins to consider the walls, doors, floors or sinks as living, breathing organisms. In this way, Levy manages to bring an inanimate world to life. Through the very absence of human presence in some of Levy’s paintings, we can discern his fascination with the human figure. In his ‘Nudes and portraits’ series and especially in his self-portrait engravings, his interest in the human form is evident.

Throughout his career, Levy has been recognised with awards, such as the Eugene Kolb award for engraving, and numerous retrospectives. The first retrospective of his work, ‘The Double Room’ was held in 2006 at the Musée Maillol in Paris. The success of the exhibition led other international museums to organise their own Levy retrospectives such as ‘The Poetics of Space’ at the Tel Aviv Museum of Art and ‘Sinks and Spaces’ at the Janos Gat Gallery, his first exhibition in New York, in 2008. Levy’s work is also featured in collections of major museums across the globe, including the Uffizi in Florence, the Victoria and Albert Museum in London, the Israel Museum and Tel Aviv Museum, and the Fondation Maeght in Saint-Paul-de-Vence.