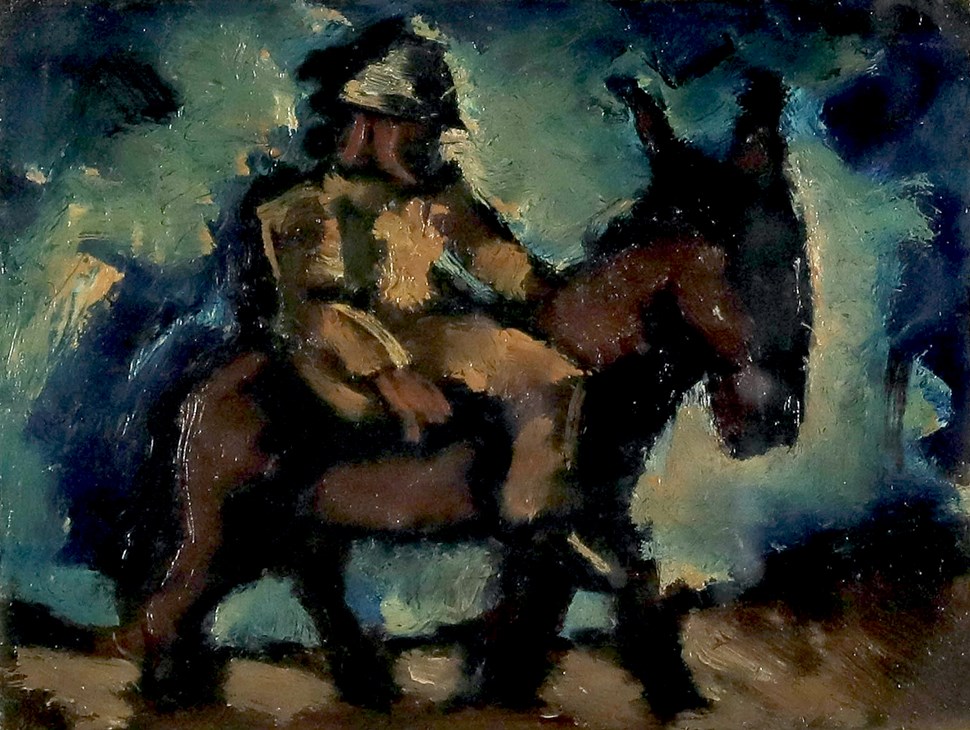 Man with a Donkey

Polish-Jewish artist Josef Herman, sometimes better known as Joe Bach, was born at Warsaw, studied at the Warsaw School of Art and worked briefly as a printer and graphic designer. Leaving Poland for Brussels in 1938, upon the Nazi invasion of Belgium Herman escaped to Great Britain where he lived in Glasgow for four years before moving to small-town Wales. However, his entire family were killed during the Holocaust.

Herman’s distinctive work was bold, diverse, sometimes colourful and always politicised; engaged with the labouring people that surrounded him. From 1944 until 1955 Herman lived in the South Wales industrial town of Ystradgynlais where he fondly became nicknamed ‘Joe Bach’ by the locals. When commissioned to design and paint a mural for the iconic 1951 Festival of Britain, ‘Joe Bach’ chose as his subject the Ystradgynlais miners. The resulting image represented six men in repose after a day’s toil and is now held at the Glynn Vivian Art Gallery in Swansea. Although the damp Welsh climate disagreed with his health and forced his move briefly to the drier climes of Spain, Herman was awarded the Gold Medal for Fine Art at the 1962 Welsh National Eisteddfod.

Between 1955 and 1972 Herman and his wife Nini Ettinger lived in rural Suffolk. The untimely death of their young daughter caused a move to London where Herman remained working until his death. His work was honoured by election to the Royal Academy of Arts and the award of an OBE.