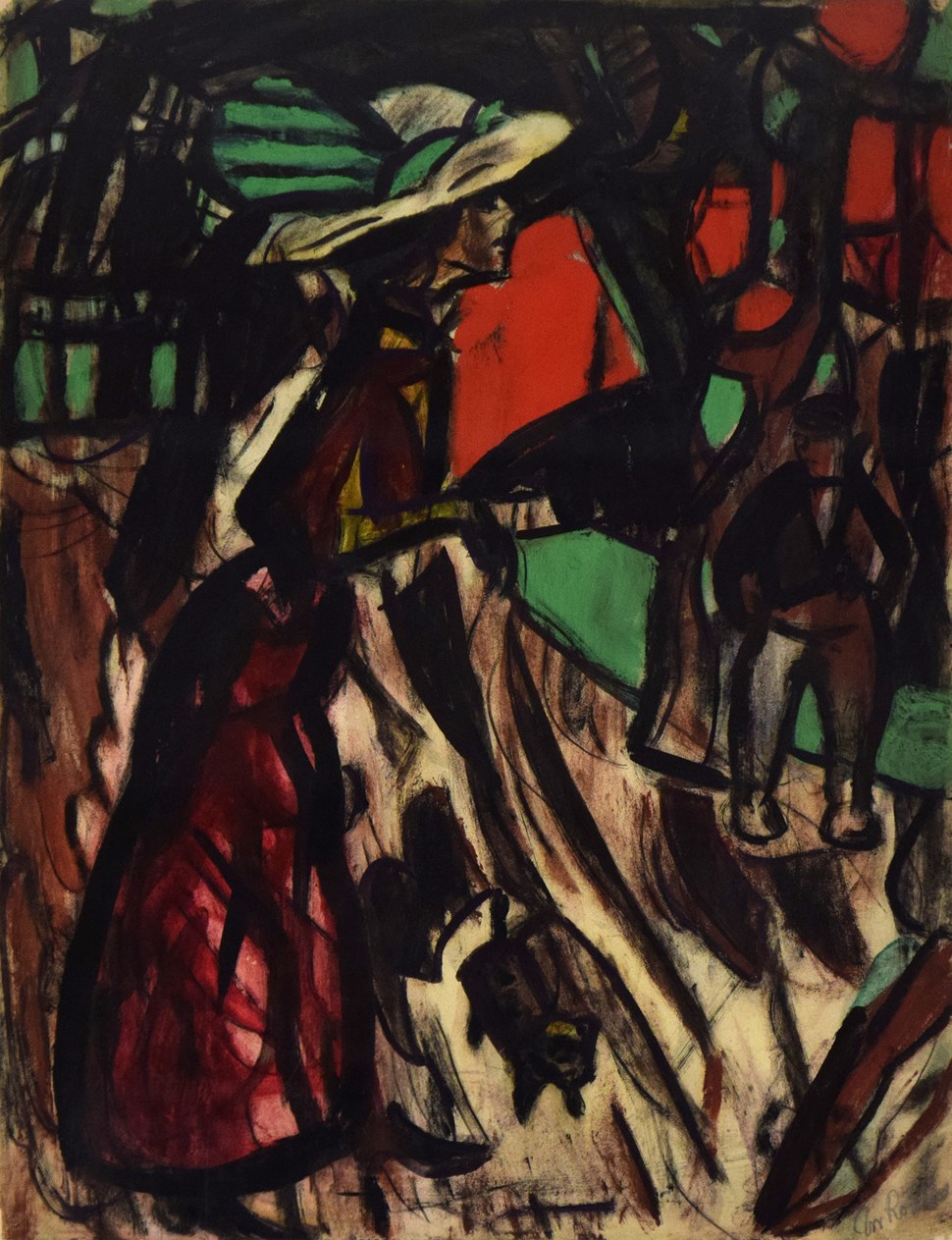 Christian Rohlfs was a German painter, born in 1849 in Prussia. While recovering from an illness as a teenager, the young Rohlfs was encouraged by his doctor, Stolle, to start painting. During his convalescence, Rohlfs produced his first drawings, which ignited a life-long passion for painting. Today, he is recognised as one of the most important representatives of German expressionism.

His traditional artistic education began at the Großherzogliche Kunstakademie in Berlin, before transferring to the Weimar Academy in 1870. This rigid, academic training had a profound impact on Rohlfs’s early work and earned him favour with the Grand Duke of Saxonia-Weimar, who supported Rohlfs for many years. Although bolstered by aristocratic support, Rohlfs sought a new direction for his work. Throughout the 1870s, he visited Paris several times, where he came into contact with the work of the Barbizon School painters and coincided with the beginnings of Impressionism. Inspired by both groups’ method of painting en plein air and by their choice of natural subjects, Rohlfs produced several large-scale landscape paintings.

In 1900 Rohlfs met the patron and collector, Karl Ernst Osthaus. Osthaus’s prestigious modern and primitive collection included works by Monet, Cezanne, Gauguin and Van Gogh, and Rohlfs was able to study these works. His exposure to the avant-garde and proximity to works by these artists gave Rohlfs the desire to experiment with various styles, including Impressionism and Post-Impressionism during which he produced his first pointillist works. In 1901, when Osthaus expressed his intention to open his own private museum, the Folkwang in Hagen, the collector asked Rohlfs to teach painting in the affiliated academy. While clearly demonstrating the collector’s support of the artist, Rohlfs never took up the position. Another crucial meeting for the artist came in 1905 when Rohlfs befriended Emil Nolde, who introduced him to the work of the expressionist group, Die Brüke. The two artists worked side by side during the summer of 1905 in Soests, near Hagen. Here, Rohlfs initiated an Expressionistic phase and reached his artistic maturity. His works from this period often featured figurative compositions executed in thick black outlines and finished with blocks of translucent colours. Rohlfs favoured mediums such as ink, tempera and watercolour, which had the common trait of producing dense lines when applied thickly as well as a more ephemeral quality by adding a wash. After seeing an exhibition of works by the Die Brüke artists in 1908, Rohlfs began making prints using woodcuts or linocuts and would sometimes colour his prints.

Throughout his lifetime, Rohlfs was committed to developing his style, tirelessly studying and experimenting with different styles, as well as and supporting the artistic community. In 1922, he attended the International Congress of Progressive Artists and signed the Founding Proclamation of the Union of Progressive International Artists, aimed at forming an international community of radical artists. Rohlfs continued to paint and produce prints late into his life. To mark his exceptional career and his 80th birthday, the Christian Rohlfs museum opened in Hagen in 1929. Today, his works are found in prestigious museum collections around the world.