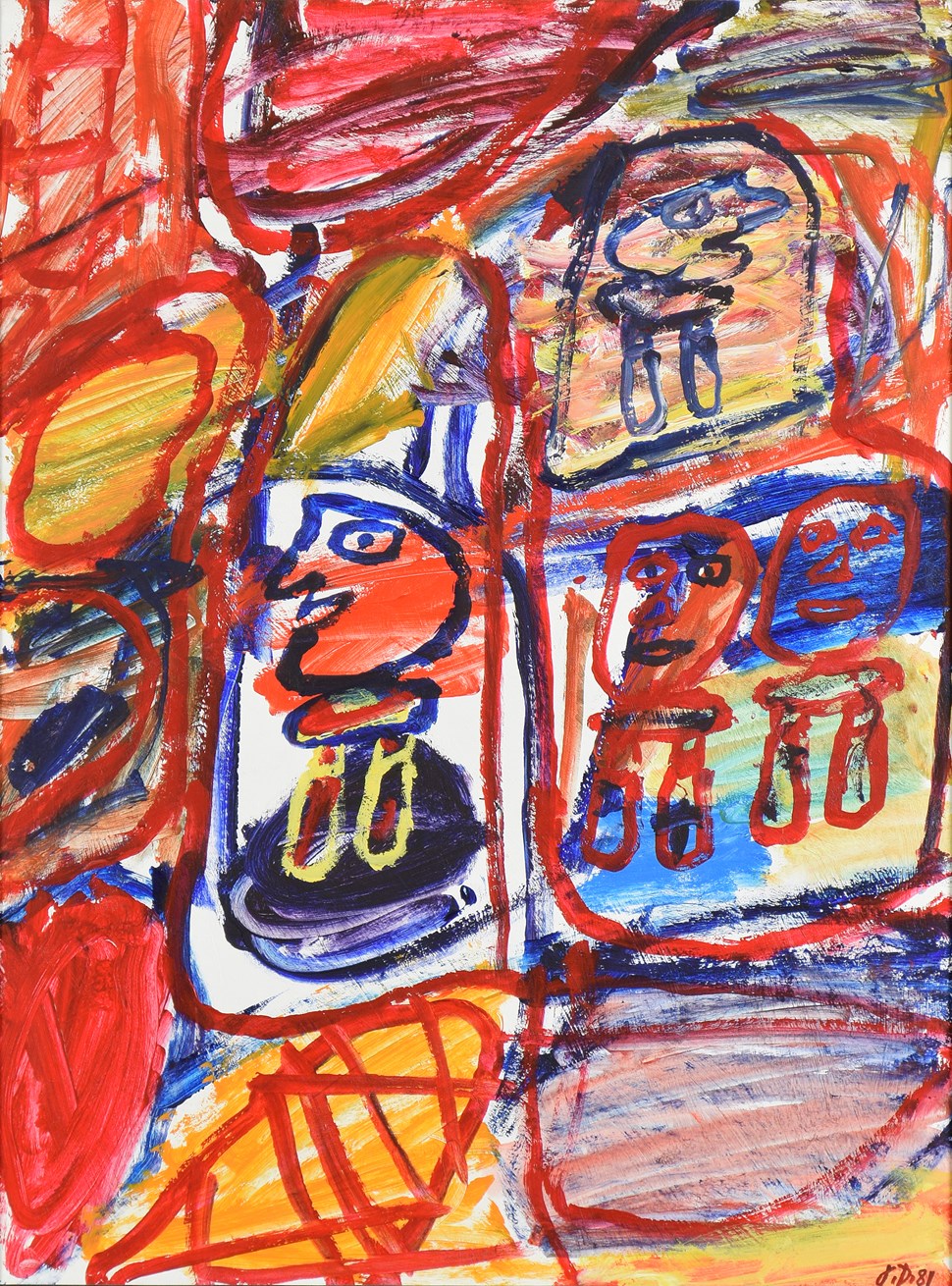 Jean Dubuffet was born in 1901 in Le Havre. Despite demonstrating an early penchant for painting, he spent his first 40 years oscillating between painting and working in the family wine business. Dubuffet was 41 when he finally committed to working as an artist, but despite his late start, he has been hailed as France’s most important post-war artist.

From the offset, Dubuffet rejected the conventional values of “high art”. His success was largely driven by his controversial Hautes Pates series in 1946, in which Dubuffet depicted ghoulish figures with mask-like heads. These child-like images with mundane colours, rough textures and thick impastos of oil-paint mixed with sand, tar and straw, were compared by critics to dirt and excrement. Determined to challenge the art establishment and disrupt conventions in painting at the time, he famously stated, “let us abolish the past and all that comes with it.” However, despite early criticisms and controversy, he quickly became the most esteemed artist in Paris.

Dubuffet’s rejection of “high art” led to the establishment of his Art Brut, or “raw art” movement, which favoured an uninhibited approach to art. He was principally influenced by art created by children, the mentally ill, prisoners and other marginal figures, and the publication of “The Art of the Insane” by Swiss psychiatrist, Hans Prinzhorn, who encouraged the mentally ill to draw and paint. Dubuffet’s work in the late 1940s and 50s would be inspired by these works, resulting in thick-textured paintings and his distinctive naïve style.

After a trip to New York in 1951, during which he met Jackson Pollock, Marcel Duchamp and Yves Tanguy, Dubuffet changed artistic direction. He moved away from representational paintings and created abstract studies of textures. This series from 1951 to 1960 was his “Célébration du sol” series, also known as his “Texturologies,” in which he depicted undetermined stretches of the ground and dust. His use of assemblage in many of these paintings, using materials such as paper and aluminium foil combined with oil paint, give the canvases a rough and uneven surface.

In the early 1960s, Dubuffet’s style underwent a major transformation. This was the result of a doodle while on the telephone and led to his “Hourloupe” graphic style: a pattern of thick, clean black lines arranged into irregular cells, some filled with blocks of red or blue. During his Hourloupe period he created figurative sculptures and architectural designs, including his “Closerie Falbala,” which he built on a hillside in Périgny-sur-Yerres in the 1970s, and his “Coucou Bazar,” a work first exhibited at the Guggenheim museum in New York in 1973, in which several puppeteers animated dozens of his sculptures.

By the time of his death in 1985, Dubuffet had achieved major recognition in the art world, he had been commissioned to create several public sculptures, and had been awarded major retrospectives at the MoMA (1963), the Guggenheim Museum (1973) and the Centre Pompidou (2001). His work is largely preserved by the Fondation Jean Dubuffet in Paris.