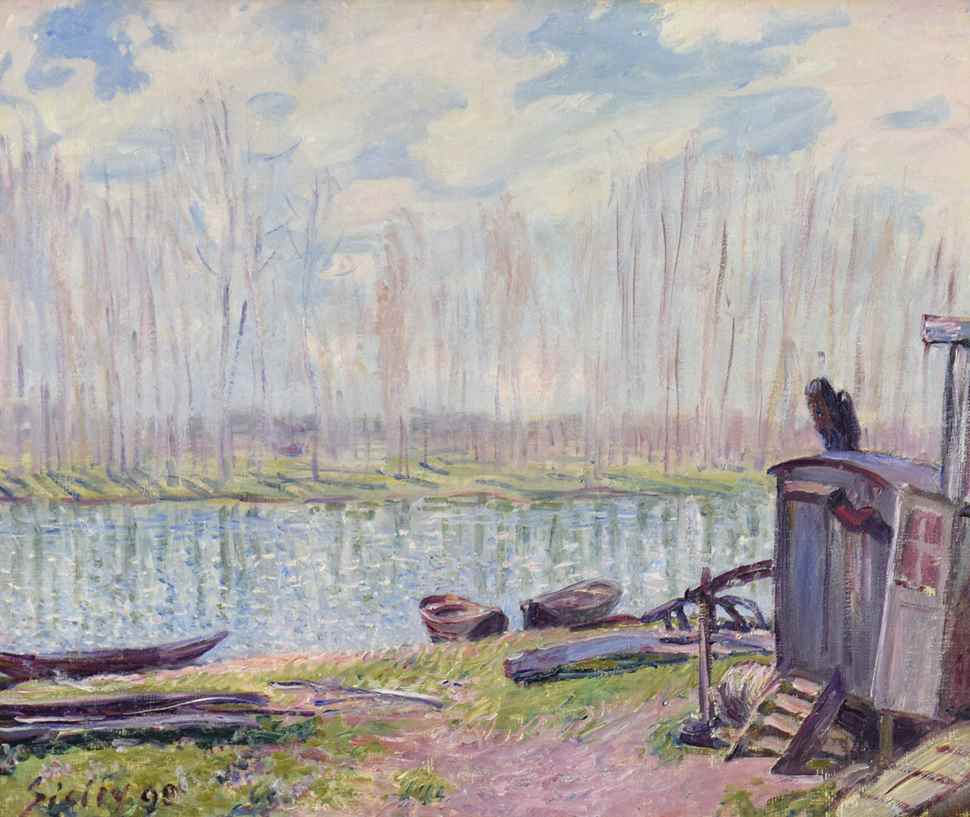 Alfred Sisley was born in Paris on 30 October 1839, the youngest of four children. His father, William, was an importer of luxury goods.

Sisley’s formal artistic training began in the studio of Charles-Gabriel Gleyre where he met Pierre-Auguste Renoir, who arrived in 1861, and Claude Monet and Frédéric Bazille who began their studies in November 1862.

After leaving Gleyre’s studio in 1863, Sisley, Renoir, Monet and Bazille continued their painting expeditions to the Forest of Fontainebleau, expanding the group to include Camille Pissarro as well as the painter Jules Le Coeur. In 1866, Sisley's mother, Felicia, died. This coincided with the development of Sisley’s romantic relationship with Marie Louise Adélaide Eugénie Lescouezec, a floral designer. On 17 June 1867, they had their first child, Pierre. Their daughter, Jeanne Adèle, was born on 29 January 1869.

In the 1870s, the Franco-Prussian War took a profound toll on Sisley’s life. The first blow was the death of Bazille on 28 November 1869 during a skirmish at Beaune-la-Rolande. The second blow was the confiscation of his living quarters in Bougival by the Prussian army.

On 27 December 1873 Sisley founded the Société anonyme cooperative d’artistes-peintres, sculpteurs, et graveurs, together with Monet, Pissarro, Renoir, Morisot and Edgar Degas. The Société anonyme members rented space from the photographer Nadar at 35 boulevard des Capucines in Paris, and opened the doors to their first exhibition on 15 April 1874.

In April 1876, the second Impressionist exhibition opened at Durand-Ruel’s gallery, 11 rue le Peletier, with eight of Sisley’s paintings on display. The following year, the third exhibition again opened in mid-April, two weeks before the beginning of the annual Salon show. This time, Sisley exhibited seventeen paintings. Five years later, in 1882, Sisley exhibited with the Société anonyme for the last time, showing twenty-seven paintings.

Sisley participated in a variety of auctions and exhibitions at private galleries beginning in the mid-1870s, such as Durand-Ruel and Georges Petit in Paris. In 1890, he became a member of the Société Nationale des Beaux-Arts, exhibiting six paintings at initial Salon at the Champs-de-Mars. Sisley would exhibit paintings at the 'new' Salon in 1891, 1892, 1894, 1895 and 1898. In addition, he had a one-man show at Boussod et Valadon in Paris in 1893, and a large retrospective of 146 paintings and six pastels at Galerie Georges Petit in February of 1897. The year 1898 ended in grief with the death of Eugénie in October. Within three months, Sisley was gone as well, perishing at home on 29 January 1899.