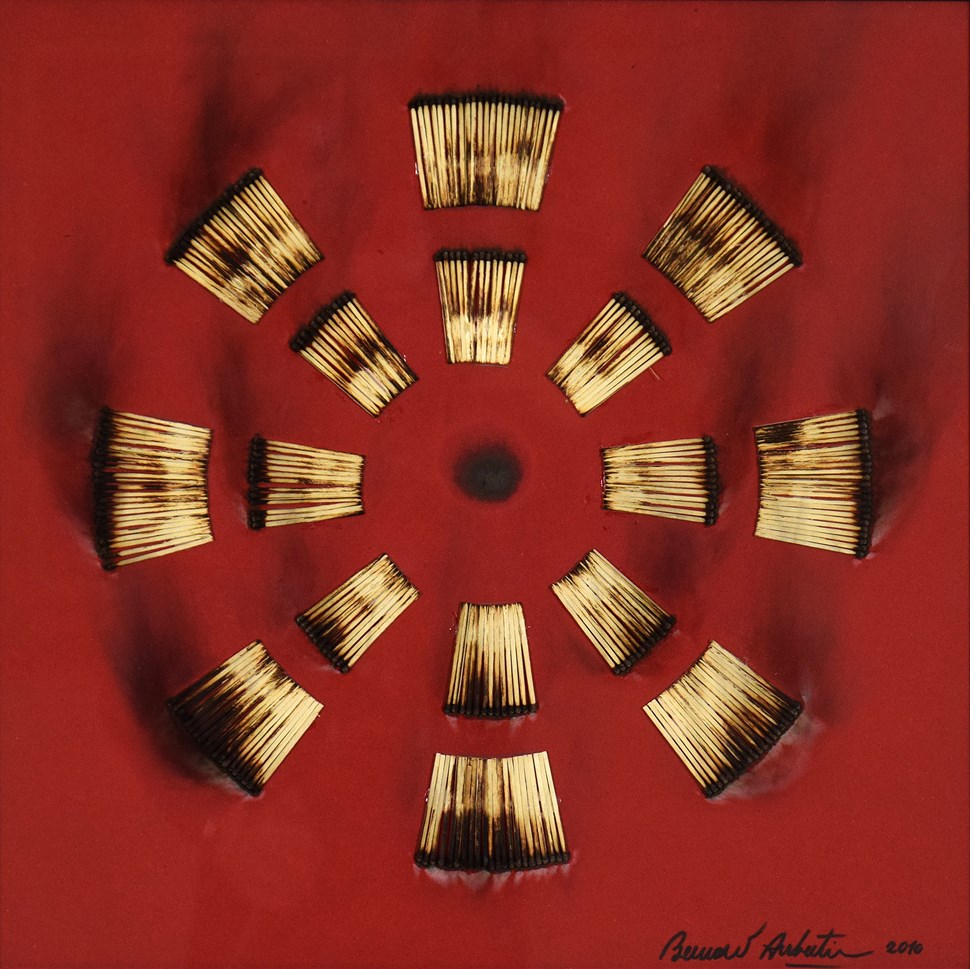 French artist Bernard Aubertin was born in 1934 in Fontenay-aux-Roses. He began his career studying decorative arts. However, his career as an artist was launched after an inspirational visit to the Paris studio of Yves Klein in 1957. He is best known for his red monochromatic works and his use of ephemeral materials such as fire. He is also known for his association with the experimental ZERO art movement, founded in Dusseldorf by Heinz Mack and Otto Piene in 1963, which included celebrated artists such as Yves Klein, Jean Tinguely, Lucio Fontana and Piero Manzoni.

Aubertin’s meeting with Klein in 1957 was of fundamental importance, particularly as it inspired his interest in abstraction and the field of monochromy. Just as Klein worked in his trademark ‘International Klein Blue,’ Aubertin adopted red as his defining colour. In 1958, Aubertin executed his first four red monochromes, which would come to define the artist’s style throughout his lifetime. Aubertin wrote extensively about his fascination for monochromy and his adoption of the colour red. In a text entitled Esquisse de la situation picturale du rouge dans un concept spatial, which was published by the ZERO magazine in July 1961, Aubertin discussed the meaning and function of monochromy. He wrote that ‘monochromy confirms the powerlessness of lines, shapes, colours, compositions, to reveal the pictorial Essence as the only quality of the picture.’ He was fascinated by the multiple associations of the colour red, writing: ‘Red is intensity, it’s blood, life, dynamism, vitality, energy’. Aubertin’s use of monochrome allowed him to create what he described as a ‘detached art.’ He maintained that art should be contemplative and not descriptive. He aimed to create works that represented the world’s objective reality. His methodical and structured approach to applying paint to his canvases contributed to the idea that his art was neutral and honest, falling somewhere in between ‘materiality and immateriality’.

By the end of the 1960s, Aubertin had introduced nails and fire into his repertoire. These Tableaux Clous and Tableaux de feu, maintained the characteristically bright red surfaces but created unique and intriguing compositions. His use of nails, matches and fire added movement and energy into his works, through the shadows cast by nails and matches on the canvas, and the charred traces of fire. In the late 1960s, Aubertin began to incorporate fire in daring performances, during which he would use a blowtorch or matches to scorch the surface of his painted red canvases. Many of these works consist of abstract compositions using matches that were set alight, creating unique variations due to the spontaneous nature of the flame. Fire, according to the artist, had a unique double function: it was at once destructive and renewable. It gave new life and a different character to his works by essentially destroying them. In addition to his canvases, Aubertin also set fire to books (Livre Brûlé, 1974), subsequently displaying their charred pages and bindings, as well as cars and grand-pianos during these performances.

During his lifetime, he exhibited alongside members of the ZERO group, including the ZERO- Edition, Exposition, Demonstration exhibition at the Galerie Schmela in Dusseldorf in 1961, the Tentoonstelling Nul exhibition at the Stedelijk Museum in Amsterdam in 1962 and the Diogenes exhibition in 1963. Since then he has exhibited internationally at Documenta 6 in Kassel, Germany in 1977, at the 54th Venice Biennale in 2011 and formed the subject of exhibitions including at the Palais de Tokyo, Paris in 2012. In 2014, his work was included in the Solomon Guggenheim Museum’s survey of the ZERO movement. His work is included in numerous permanent collections, including the Musée de Graz, the Museum of Dusseldorf and the Centre Nationale de l’Art Contemporain.