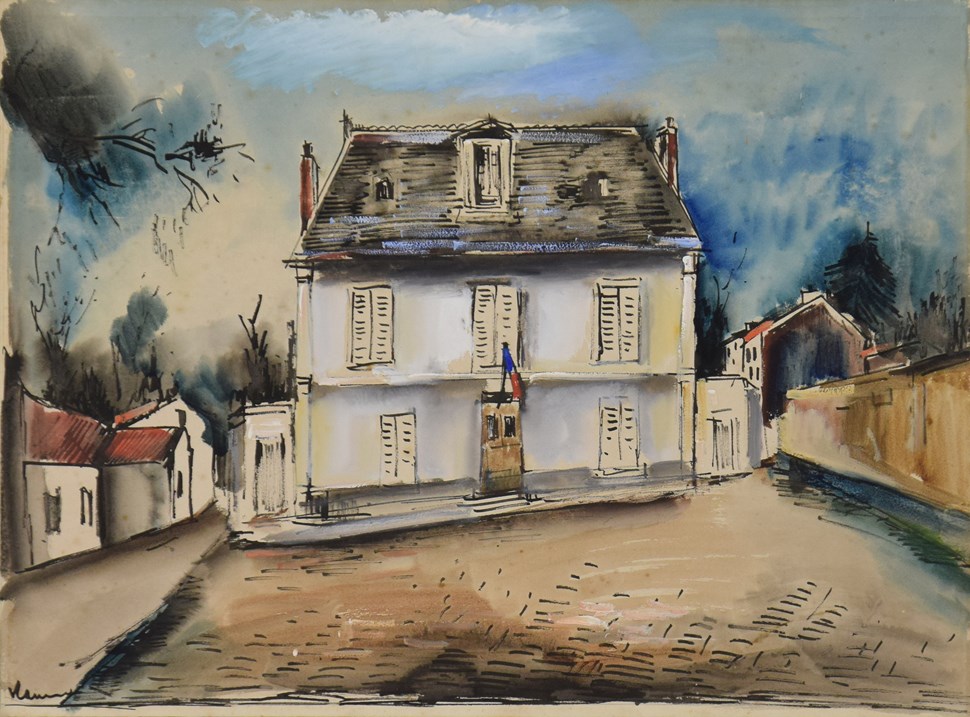 For the next few years Vlaminck lived in or near Chatou outside Paris (the inspiration for his painting Houses at Chatou), painting and exhibiting alongside Derain, Matisse, and other Fauvist painters. Vlaminck's compositions represent a deep familiarity with the work of the Impressionists who had painted in the same area nearly fifty years before. At this time his exuberant paint application and vibrant use of colour displayed the influence of Vincent van Gogh. After visiting a Van Gogh exhibition De Vlaminck even declared he "loved Van Gogh that day more than my own father". De Vlaminck’s painting Sur le zinc calls to mind the work of Henri Toulouse-Lautrec and his portrayals of prostitutes and solitary drinkers, but does not attempt to probe the sitter's psychology—a break with the century-old European tradition of individualised portraiture of modernist ennui. In De Vlaminck’s landscape paintings, his approach was similar: ignoring detail so that the landscape expresses mood through violent colour and vigorous brushwork, as in Sous bois (1904). The following year, he began to experiment with "deconstruction," turning the physical world into dabs and streaks of colour that convey a sense of motion. His paintings Le Pont de Chatou (The Chatou Bridge), Les Ramasseurs de pommes de terre (The Potato Pickers), La Seine a Chatou (The River Seine at Chatou) and Le Verger (The Orchard) exemplify this trend.

From 1908 De Vlaminck’s predominant influence appears to be that of Paul Cézanne, his palette becoming darker and almost monochromatic, punctuated by heavy strokes of contrasting white paint. In 1911 he travelled to London to spent time painting beside the River Thames as his Impressionist forebears had done so. A poet and prolific auto-biographer, in later life De Vlaminck became resentful that Fauvism had been superseded by Cubism and famously blamed Picasso "for dragging French painting into a wretched dead end and state of confusion".