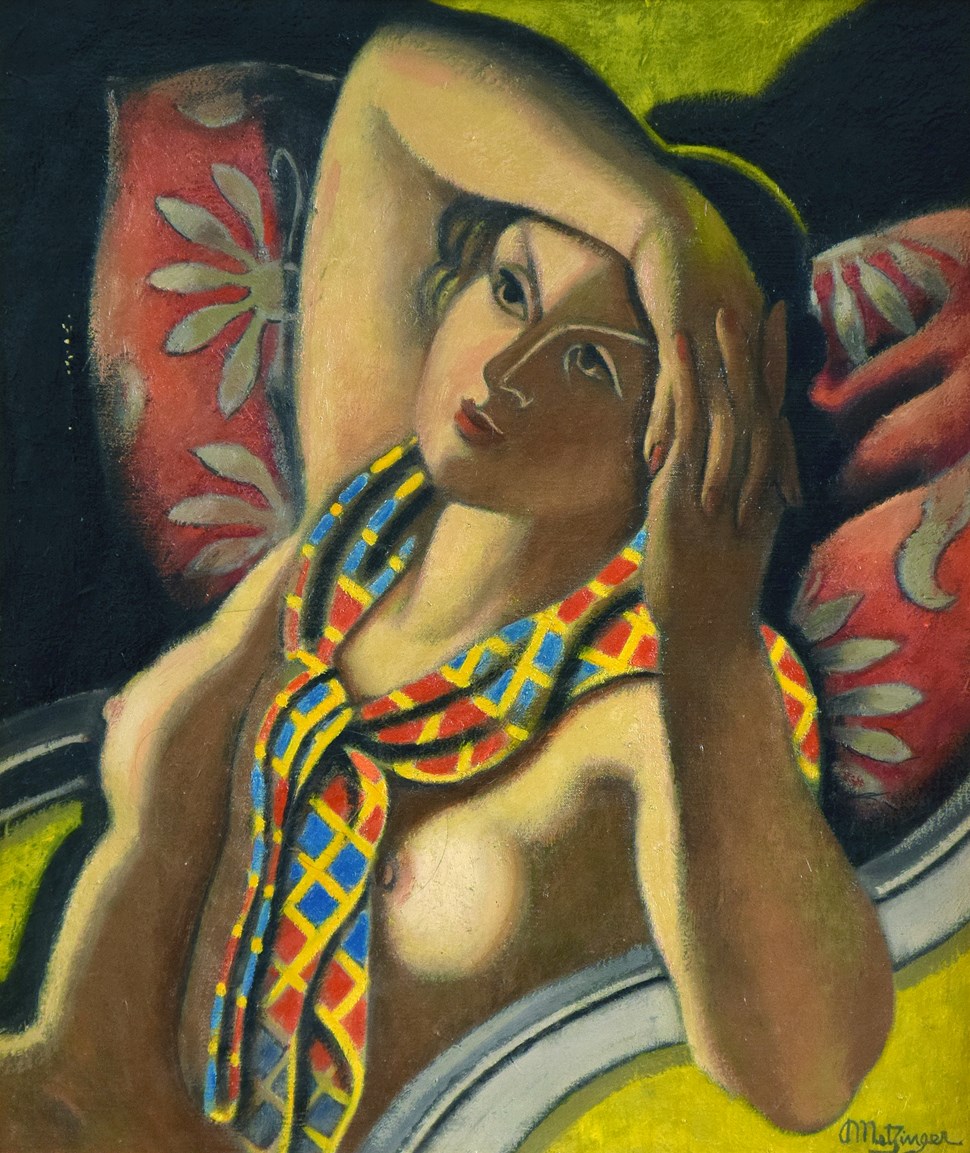 Jean Metzinger was born in 1883 in Nantes, France. At the age of 20, Metzinger had already decided to become an artist, moving to Paris to realise this ambition. Within months he had established friendships with fellow artist Robert Delaunay and the writer Max Jacob. In 1908, Jacob introduced Metzinger to the French poet Guillaume Apollinaire, an early exponent of Cubism whose circle famously included Georges Braque and Pablo Picasso. Meeting the legendary Braque and Picasso had a profound impact on Metzinger. Until then, his work had been mostly influenced by the Neo-Impressionists Georges Seurat and Henri-Edmond Cross. In addition to employing a Divisionist style, he focused on typical subjects favoured by the Post-Impressionists, including scenes of Parisian life. In addition to being an accomplished painter, Metzinger was a theorist, writer, critic and poet, but is best known in art historical terms as one of the first theoreticians of Cubism.

In the early 1910s, Metzinger began exhibiting with his contemporaries in Paris. In 1910, he exhibited for the first time at the Salon des Indépendants and the following year he contributed to the Salon d’Automne. In 1911, Metzinger participated in the controversial Salle 41 at the Salon des Indépendants, first formal group exhibition of Cubist painters. Alongside his artistic pursuits, Metzinger frequently published articles on contemporary painting, including one piece which first noted in print that Picasso and Braque had dismissed traditional perspective and merged multiple views of an object in a single image. However, the most successful of these literary works was published in 1912. Written together with artist Albert Gleizes and entitled Du Cubisme, the text proposed a theoretical foundation for Cubism. To date, it is the most comprehensive and coherent survey of the theories and aims of the movement. Indeed, Metzinger considered the work to be among his greatest achievements. Even after its publication, Metzinger would continue to develop his writings and theories of Cubism. In 1916 he wrote to Gleizes to tell him of his discoveries: “after two years of study I have succeeded in establishing the basics of this new kind of perspective I have talked so much about. It is not the materialist perspective of Gris, not the romantic perspective of Picasso. It is rather a metaphysical perspective…the geometry of the fourth space has no more secrets for me.”

The ideas articulated in Du Cubisme emerged from weekly discussions held at the home of the cubist painter Jacques Villon. Here artists such as Marcel Duchamp, Robert Delaunay, Henri Le Fauconnier, Juan Gris, Fernand Léger and the Russian sculptor Alexander Archipenko, joined Metzinger and Gleizes to discuss their ideas about painting. Mathematics and geometry were frequent topics of conversation, leading the group of artists to organise a collective exhibition of their works related to these topics. At Villon’s suggestion, the group was called La Section d’Or, named after theorems of mathematical proportions of the human figure in the writings of Pythagoras and Leonardo da Vinci. The first Section d’Or exhibition took place in October 1912 at the Galerie la Boétie. Featuring 180 works by 31 artists, it is widely considered the most substantial Cubist exhibition to take place before the First World War.

As a result of the success of the exhibition, in 1915, the art historian and collector Léonce Rosenberg began to represent many of the Cubist artists from the Galerie la Boétie exhibition, including Metzinger, Gleizes, Georges Valmier, Henri Hayden and Auguste Herbin. Works by these artists were on display at Rosenberg’s recently opened gallery, the Galerie de l’Effort Moderne. In 1919, Rosneberg arranged an exhibition of Metzinger and Léger’s work, as well as several other cubist solo and group shows. With Rosenberg’s support, Metzinger enjoyed early commercial and critical success, as Apollinaire wrote, Metzinger’s “art, always more and more abstract, but always charming, raises and attempts to solve the most difficult and unforeseen problems of aesthetics.”

In the early 1920s, Metzinger began to distance himself from Cubism and began to experiment with Purism. His form became softer, more legible and his figures less fragmented. This new simplification of form is evident in a series of port views painted at Boulogne-sur-Mer in 1920 and led to increasingly Art Deco works in the late 1920s and 1930s. In recent years, Metzinger’s market has grown in strength and his works are found in several public collections across the globe. To celebrate the 100th anniversary of the publication of Du Cubisme by Metzinger and Gleizes, the Musée de la Poste in Paris put on a survey of their work, highlighting their exemplary contributions to the development of modern art.