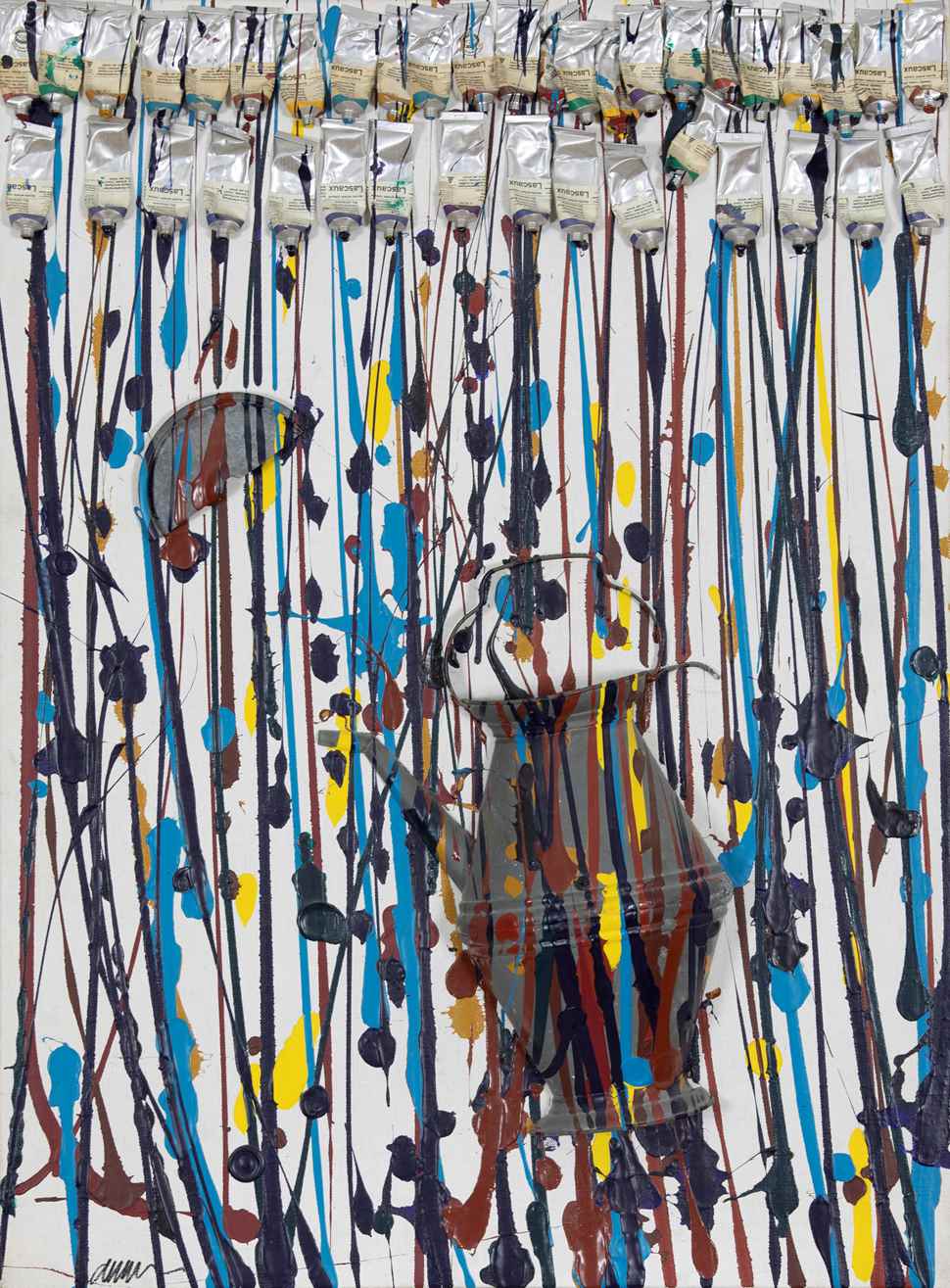 French-American artist Armand Fernandez, better known as Arman, was born at Nice in 1928 the son of an antiques dealer and cellist. He studied philosophy, mathematics and art history before attending the École Nationale des Arts Décoratifs in Nice and the École du Louvre in Paris.

Whilst living and working between New York City’s Chelsea district and his hometown of Nice, he met the Dada artist Marcel Duchamp and – after the fashion of artist Vincent Van Gogh – began signing his work with the iconic abbreviation of given his name ‘Arman’. In a reassessment of the role of art in a hyper-consumerist society, Arman co-founded the Nouveau Réalisme group in October 1960. His work, often concerned with destruction and recomposition, is uniquely characterised by a radical inventiveness: Coupes, Colères, Cachets, Accumulations and Poubelles.

Inspired by a 1954 exhibition of Dada artist Kurt Schwitters, Arman began using traces of ink or paint (the ‘cachet’) as the painting itself. His Accumulations of objects were collections of identical – and often everyday - objects uncannily arranged in polyester castings or within Plexiglas cases; his first welded accumulations were created in 1962 and featured metal objects such as axes. His Poubelle (‘rubbish bin’) phase featured collections of strewn refuse. Indeed, in 1960, Arman filled with rubbish the Galerie Iris Clert in Paris for creating Le Plein (‘Full’); a witty a counterpoint to the previous exhibition at the same gallery by his old friend Yves Klein called Le Vide (‘Void’). The Coupes (‘cuts’) and the Colères (‘anger’) featured Arman’s sliced, burned, or smashed objects arranged on canvases, often using objects with a strong identity or function such as musical instruments (mainly violins and saxophones) or bronze statues cast at his own foundry in Normandy in France.

One of Arman’s largest Accumulations is Long Term Parking (1982) an 18-meter (60 foot) high accumulation of 60 automobiles embedded in over 18,000 kg (40,000 lbs) of concrete, permanently on display at the Château de Montcel in Jouy-en-Josas in France. Another, his Hope for Peace (1995) was specially commissioned by the Lebanese government to commemorate 50 years of service from the Lebanese military and at 32 metres (105 feet) high, stands in the city of Beirut composed of 83 tanks and military vehicles.