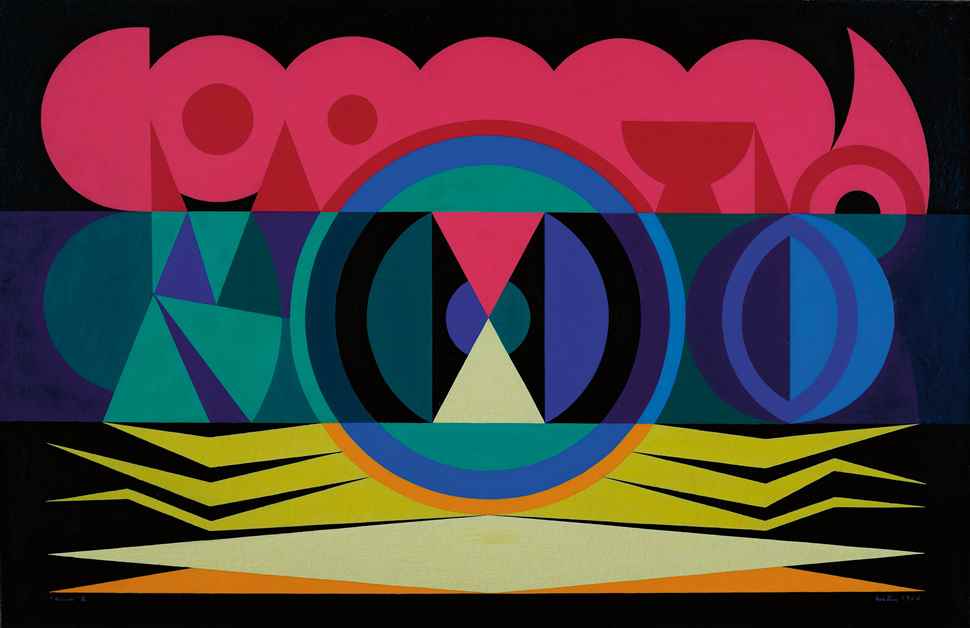 Auguste Herbin was a French Cubist and later abstract painter, celebrated as a pioneer of non-figurative, 'radical geometric' abstraction in France while also associated with movements including Orphism, Purism and New Objectivity.

Born in Quiévy, a small village near the Belgian border, Herbin was the son of a workman. He attended the Ecole des Beaux Arts in Lille where he produced post-Impressionist works from 1898 to 1901, before moving to Paris and working in isolation for several years. After visiting exhibitions of Vincent Van Gogh, Paul Gauguin and Georges Seurat, he joined the Fauvist movement.

Gradually, Herbin turned to Cubism. Encouraging this transition was Cézanne's 1907 retrospective at Salon d’Automne and a move in 1909 to the Bateau Lavoir, where his studio was in close proximity to those of Pablo Picasso and Juan Gris. Though his first Cubist works appear in 1913, Herbin’s first one-man exhibition was at the Galerie Clovis Sagot, Paris in 1912.

From 1917 to 1921, Herbin moved to "an ornate phase of Cubism akin to folk art". This work contrasted from that of 1922 to 1925, when he reverted to a more figurative style (a tendency echoed in the oeuvres of Fernand Léger and Picasso during the post-war era). Herbin then settled back into abstraction in 1926, applying himself to organic, often spiral-like forms, before once again pursuing 'pure' geometric abstraction.

From 1938, Herbin's interest in the Italian Trecento led him to more concrete, strictly two-dimensional painting and simple geometric forms. After the Second World War, the artist was co-founder and vice president (also president from 1955) of the Salon des Réalites Nouvelles.

Herbin developed a compositional system called "alphabet plastique", based on the structure of letters, in 1946. This geometric vocabulary of coloured shapes partly derived from Goethe's Farbenlehre or Theory of Colors as well as Rudolf Steiner's anthroposophical writings. It was based on Herbin's conviction that synaesthetic parallels exist between letters, musical sounds, colours and forms, such that words and tones can be expressed in painting. According to his "alphabet plastique", for example, the letter C is dark red, has the form of a circle or square and corresponds to the solfège syllables "do" and "so". For his work during this period (Vierge, Homme et Femme, Foetus, Guerre et Paix and Abri, e.g.) Herbin interpreted terms and expressions loaded with meaning. In 1949, he published his system of "alphabet plastique" as well as colour theories in L'art non-figuratif non-objectif, which took on great significance for a younger generation of artists.

During the 1950s, Herbin was an active designer of tapestries. A lateral paralysis in 1953 forced him to learn painting with his left hand.

Herbin died in Paris at the end of January, 1960. One painting, Fin, remained unfinished.

Herbin’s architectural approach and colour effects have made his pre- and post-war work extensively known in the international art world. Between 1955 to 1972, his work was exhibited at documenta I, II, V and VI (in the last programme, Harald Szeemann put it in the category of Individual Mythologies). Herbin was represented at the Guggenheim Museum, New York in 1979 and in the exhibition Positionen unabhängiger Kunst in Europa um 1937 at the Kunstsammlung Nordrhein-Westfalen in Düsseldorf in 1987. A retrospective at the Museum Haus Konstruktiv was held in 2014.