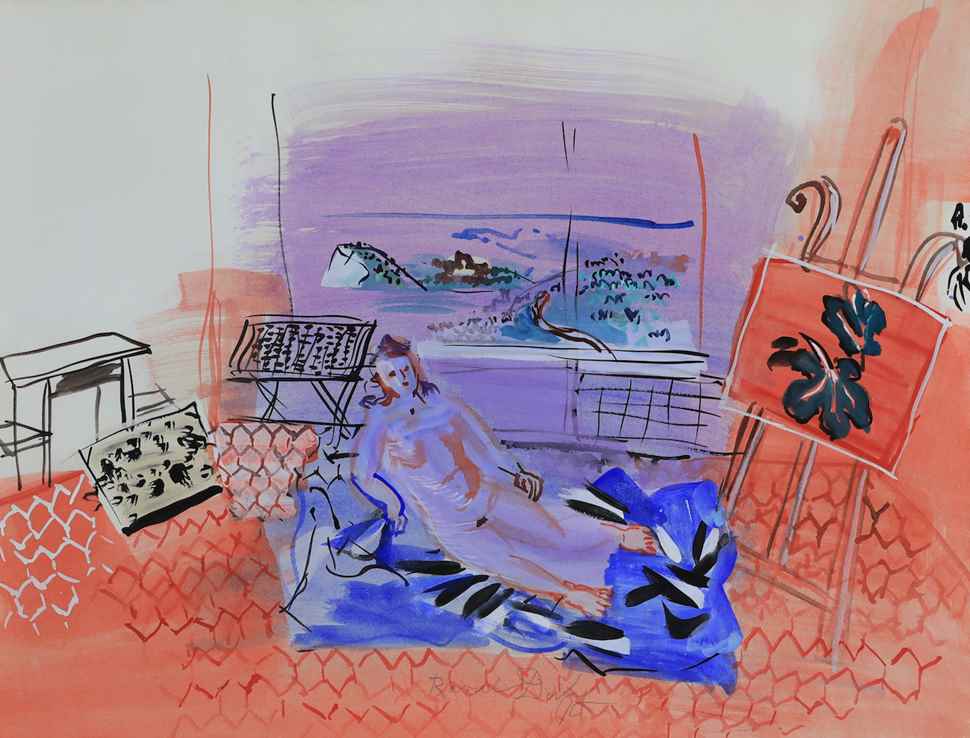 Raoul Dufy was a renowned French Fauvist painter, famous for his colourful, decorative designs. He was born in Le Havre, Normandy in 1877. Dufy had a simple upbringing, leaving school at fourteen to work at a Brazilian coffee-importing company. His formal art education began when he was eighteen at Le Havre's École des Beaux-Arts, where he took evening art classes. He continued to paint within the purlieu of Le Havre and was greatly inspired by the Impressionist landscape painters Claude Monet and Camille Pissarro. In 1900, after serving in the military for one year, Dufy won a scholarship to the École Nationale Supérieure des Beaux-Arts in Paris.

Dufy began painting watercolours of the Norman landscapes but was soon widely celebrated for his brightly coloured and bold contoured paintings – in dialogue with the Fauvist style. He remained faithful to Fauvism until Paul Cézanne’s work guided him to embrace a subtler aesthetic. This new mode of sobriety saw his work return to a lighter style, which he celebrated through rapid inscription-like drawings over vivid backgrounds of colour washes. The rise of Cubism in Paris during the first two decades of the 20th century influenced him to develop a systematic approach that was later known as stenographics. Using this he experimented with foreshortened perspective, thin washes of paint and skeletal structures. In this style, he portrayed the lavish scenes of the French Riviera, leisureliness of the period, and chic revelries. Dufy was also fascinated by other amusements such as regattas, horse races and concerts and loved to depict the excitement and commotion of the crowds.

Dufy had his first exhibition in 1901 at the Salon des Artistes Français, following a string of exhibitions over the following years. In 1906 he took part in the Cercle de l’Art Moderne Exhibition in Le Havre with artists Georges Braque, Henri Matisse and Henri Charles Manguin. Dufy was given his first retrospective in 1921 at the Galerie Bernheim-Jeune and in 1932 his first painting was accepted into a national collection. He celebrated two large commissions for the 1937 Exposition International des Artes et Techniques dans la Vie Moderne. The most notable of the two was the adornment for the Pavilion of Light and Electricity. He was commissioned with the task to illustrate the history of electricity from the classical era to its current position in 20th century developments. He painted ‘La Fée électricité’, a huge fresco which was donated to the Musée d’Art Moderne in 1964. In 1952 he represented France at the 26th Venice Biennale, where he won the Gran Premio. A year later he died aged 75, of polyarthritis, an illness he had been suffering from since 1937.