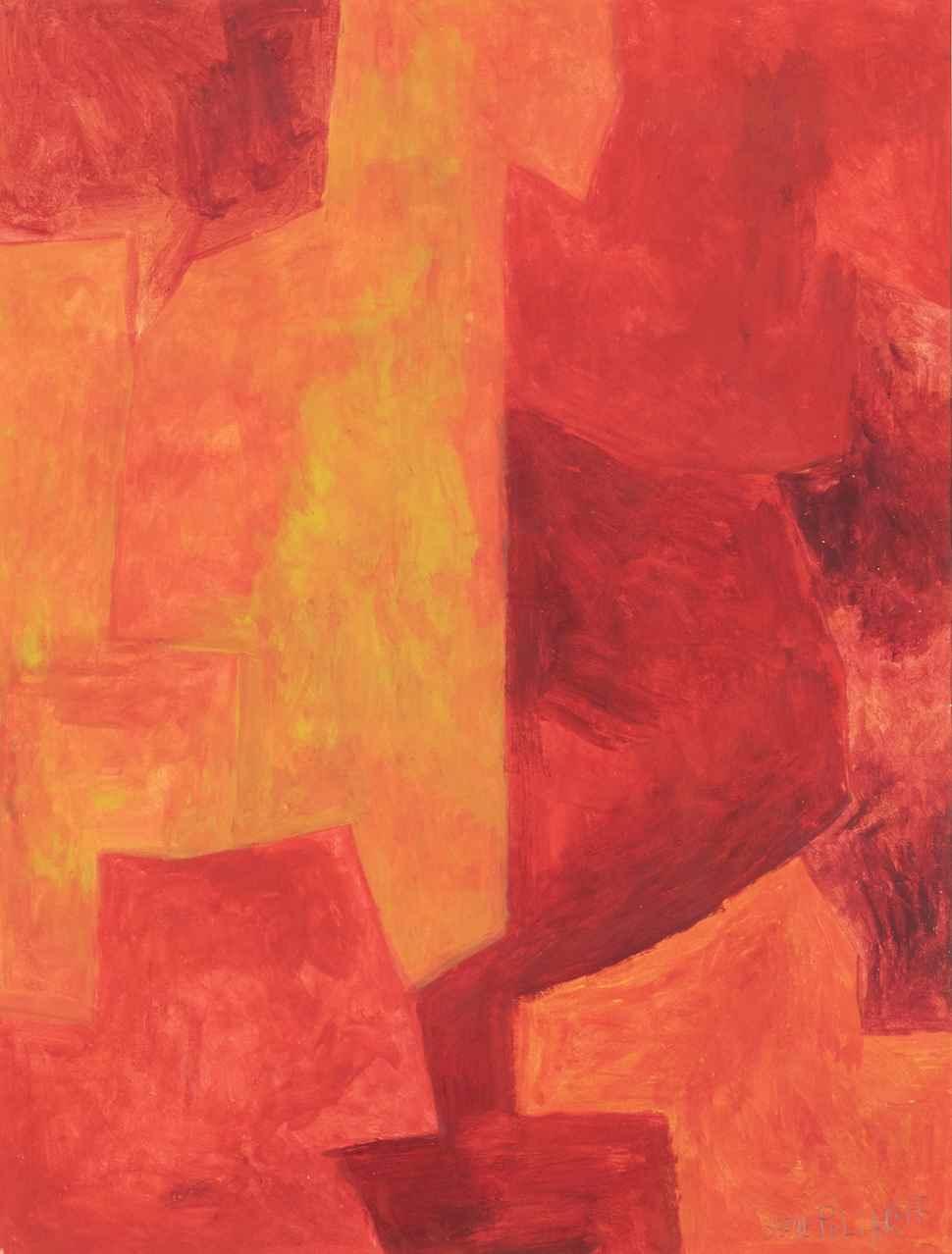 Serge Poliakoff was a Russian-born French modernist painter belonging to the "New" Ecole de Paris (Tachisme). Known for his striking palette and bold exploration of form, Poliakoff was a leading figure in the post-war abstract movement in Europe.

There are contradictory accounts of the circumstances surrounding Poliakoff's leaving Russia in the late 1910s, but sources cite his leaving between 1917 and 1919, more or less after the outbreak of Russian Revolution. Before settling in Paris in 1923, where he spent most of his life, Poliakoff moved from from Constantinople to Sofia, Belgrade, Vienna and Berlin. He began studying painting while earning a living as a guitarist, enrolling at the Académie Forchot and Académie de la Grande Chaumière in Paris 1929/1930. Poliakoff studied at the Slade School of Art after relocating to London in 1935, and it was here that the artist discovered abstract painting, as well as the importance of layering colour.

After this time, Poliakoff increasingly turned towards abstract art, employing colour as colour without any figurative context. In 1937 Poliakoff returned to Paris, where he met Wassily Kandinsky, a decisive influence in this direction. Sonia and Robert Delaunay taught Poliakoff to appreciate the emotive potential of colour and awakened an interest in simultaneous contrasts. Another important source of Poliakoff’s pictorial language was the painter and sculptor Otto Freundlich, with his curved colour-form compositions.

In 1938, Poliakoff painted his first abstract pictures. He developed a very individual form of abstract painting, arranging different fields of colour alongside one another. Shades of brown and grey were his preferred colours during the 1940s, while from the 1950s he extended his palette to include bright contrasting tones. While Poliakoff attained his mature style c. 1948, it was not until 1952 that he was able to give up his career as a professional musician and devote himself to painting.

In the early 1950s Poliakoff stopped using outlines to juxtapose forms on canvas; only colour was left to distinguish between them. Particularly concerned with giving the canvas an animated sense of its own life, Poliakoff abandoned industrial paints to instead pursue a painstaking process of grinding his own pigments. By the time of his final "forme unique" oil paintings, each depicting a single form, that Poliakoff conceived well into his sixties, colour itself became the medium. In his Cahier I of 1965, he declared: “The painting should be monumental, that is to say larger than its dimensions.”

Poliakoff’s work is included in significant collections throughout the world, including Tate, UK; Stedelijk Museum, The Netherlands; Solomon R. Guggenheim Museum, USA; Museum of Modern Art, USA; Musée d’Art modern de la Ville de Paris, France; Hirshhorn Museum, USA; The Art Institute of Chicago, USA; and Musée national d’Art moderne, Centre Georges Pompidou, France. He exhibited widely, from 1938 – 1945 contributing to the Salon des Indépendants. His first one-man exhibition was at the Galerie L'Esquisse, Paris, 1945. He was included in the most prestigious exhibitions of modern post-war art, including Documenta II, Kassel, Germany (1959); and the Carnegie International, Pittsburgh, USA (1958). A retrospective covering the years 1938 – 1963 was held at the Whitechapel Gallery, London (1963). Following Poliakoff’s nationalisation in France in 1962 the artist received his own room at the Venice Biennale.

Serge Poliakoff died in Paris in 1969.