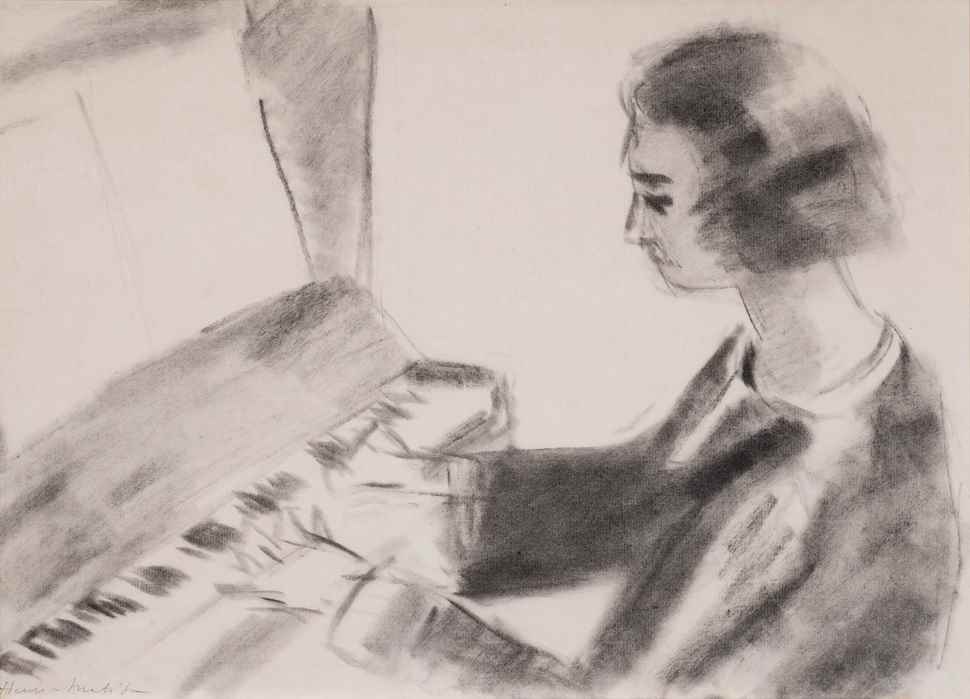 Woman at the Piano

Henri Matisse was born in 1869 in Le Cateau-Cambrésis, to a family of weavers, and raised in Bohain. In 1887, Matisse moved to Paris to study law, but after a bout of appendicitis, his mother brought him art supplies and he discovered “a kind of paradise.” He, therefore, decided to take up art and studied at the Académie Julian, under the esteemed Symbolist painter, Gustave Moreau. From an early stage, Matisse drew inspiration from Asian art, especially Japanese art, the decorative qualities of Islamic art and the angularity of North African sculpture. His personal collection of African and Middle Eastern fabrics and carpets visibly shaped his use of colour and pattern in his works. He was similarly influenced by the work of other modern artists, including Manet and Cézanne. In his choice of subjects, Matisse returned to still life, nudes and the human figure throughout his career, believing the human form to have been neglected by the Impressionists. Matisse was not only one of the greatest colourists of the 20th century, but also a great innovator. His aim was to produce a pictorial harmony between line and colour, hoping to create art that was a “soothing, calming influence on the mind, rather like a good armchair.”

Matisse’s mastery of colour was first demonstrated by his role in the emergence of the Fauvist movement. After his first solo exhibition at Ambroise Vollard’s Gallery in 1904, he spent the summers of 1904 and 1905 in the South of France, along with artists such as Signac, Henri Edmond Cross, André Derain and Maurice de Vlaminck, producing paintings inspired by the glaring sun of Saint Tropez with bright, contrasting colours. In 1905, Matisse exhibited with these artists at the Salon d’Automne. They used loud, unmodulated colours to create expressive and decorative works of art. A review by the critic Louis Vauxcelles, in which he mentioned a “Donatello chez les fauves” (Donatello among the wild beasts) - referring to a Donatello sculpture that shared a room with these artists - led to them becoming known as the Fauves. The movement was met with unease, as demonstrated by the critic Camille Mauclair, who wrote; “A pot of paint has been flung in the face of the public.” Despite this period of notoriety in France, Matisse was admired abroad and revolutionised the use of colour, as his student, the Swedish painter Henrik Sorensen, recalled, “He gave us the sense of colour as a means of creating depth, distance and motion in the picture.”

Unphased by the hostile reception of fauvism in France, Matisse went on to create some of his finest work in the period that followed the decline of Fauvism in 1906, and after his move to Nice in 1917. These works are recognisable in their flattened forms and decorative patterns. In 1917, Matisse relocated to Cimiez, a suburb of Nice. His work in this so-called “Nice period,” featured a softer approach and a return to traditional forms of figuration. He often depicted airy, sunlit interiors, fulfilling his ambition to create “an art of balance, or purity and serenity, devoid of troubling or depressing subject matter.” One of his repeated subjects of this period was the odalisque, often set in an elaborate, orientalist interior. While greatly valued today, these paintings were dismissed as superficial and decorative.

After an intestinal operation in 1941, Matisse had to use a wheelchair, nevertheless, he had an enduring determination to create art. This final decade of Matisse’s life was a period of radical reinvention and vitality. He abandoned painting altogether and began “drawing with scissors,” by cutting out shapes from painted paper and creating paper collages, called gouaches découpés. To create these cut-paper compositions, Matisse was helped by studio assistants, who painted sheets of paper with brightly-coloured gouache, before Matisse cut foliage, fruit, acrobats, dancers and swimmers out of them. One of these assistants recalled that Matisse “knew what he was looking for, but we didn’t.” By cutting directly into colour, Matisse found the harmony between colour and line that he had always hoped to achieve. In these cut-outs, he simplified forms to their absolute essence. His Blue Nudes series demonstrates his ability to use colour and geometry to create complete simplicity. Matisse’s contemporaries dismissed these cut-outs as paper jokes, but Matisse insisted that however incomprehensible to his contemporary audience, his work would speak to the future.

As he predicted, Matisse’s work has indeed been hugely influential for later generations of artists. Matisse’s reform of colour paved the way for American Abstract Expressionism during the 1940s and 1950s. Alongside figures such as Picasso and Marcel Duchamp, Matisse is widely regarded as one of the artists who revolutionised art in the opening decades of the 20th century. Due to his personal association with art collectors during his lifetime, including the Russian art collector Sergei Shchukin, American collectors Gertrude, Leo and Michael Stein and their friends, Clarabel and Etta Cone, many of Matisse’s works are housed in these collections, such as the Shchukin and Morozov collections in St Petersburg and Moscow respectively, and the Cone collection at the Baltimore Museum of Art. Matisse’s work is also found in the world’s leading galleries, including the MoMA and the Guggenheim in New York, the Tate Modern in London and the Centre Pompidou in Paris.