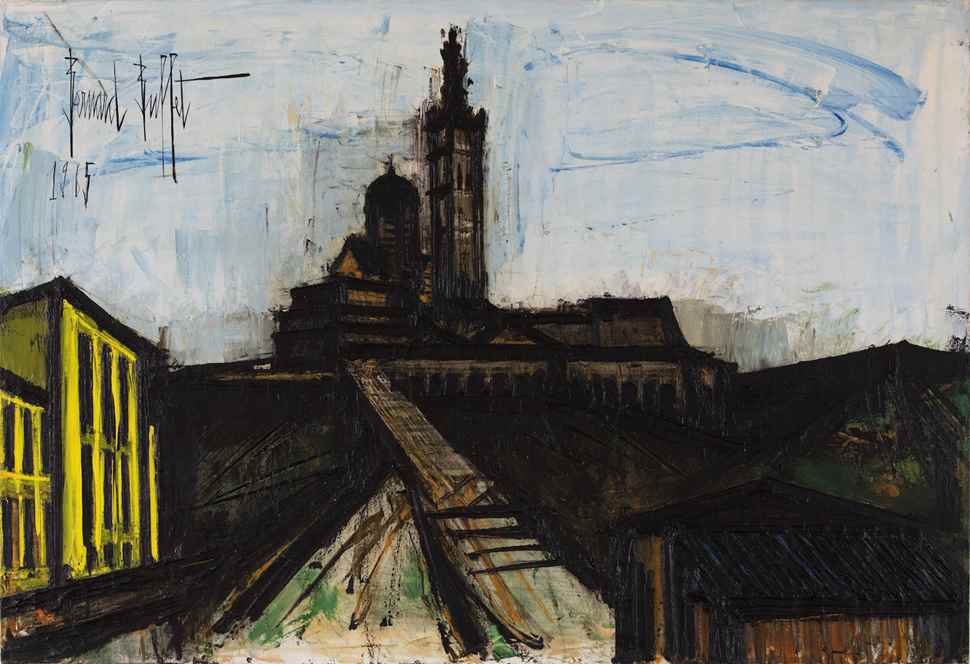 Born in 1928, Bernard Buffet’s distinctive painterly technique would later become an emblem of post-war Expressionist art in Paris. Heavily defined by the jaunty, angular script of his signature, Buffet’s work would often feature still lifes, portraits, scenes of the French Riviera and subjects such as flowers, clowns and bull fights. He produced a large and diverse body of work amounting to more than 8,000 paintings.

Buffet began his formal studies at the prestigious École Nationale Supérieure des Beaux-Arts, Paris. During this time, he produced his first still lifes, inspired by the traditional, realist styles of Gustave Courbet and Jean Siméon Chardin whom he would often observe in situ after the reopening of the Louvre Museum in 1945. Despite many post-war artists embracing abstraction, Buffet asserted his preference for figurative over abstract painting, declaring the latter ‘limited and boring’. His early works can be characterised by muted tones owing to wartime shortages of pigments and often depict difficult subject matters.

Buffet fast became a prominent figure within the French beau monde, experiencing celebrity at the age of twenty, and fortune a decade later during the 50s. In 1946 he exhibited his first painting, a self-portrait, at the Salon des Moins de Trente Ans at the Galerie Beaux-Arts, following this he enjoyed successful annual exhibitions. In 1956, the Paris Match published an article declaring him “the young millionaire painter”.

He was particularly admired by critics in Japan and the US and towards the end of the 70s became a household name in Britain. In 1958 Buffet had his first retrospective at the Galerie Charpentier, aged just 30. During the 60s, however, Buffet received criticism from the Parisian art establishment who considered him too commercial, and adversaries such as Picasso publicly dismissed his work.

In recent decades, his oeuvre has experienced a profound revival in France with an exhibition at Le Musées de la Vieille Charité in Marseille (2009) where there is also a plan to create a museum dedicated to Buffet’s work, additionally, a landmark retrospective at the Musée d’Art Moderne de la Ville de Paris (2016).

In 1999, Bernard Buffet tragically committed suicide after years of suffering from Parkinson’s disease. He had previously declared that the day he could no longer paint would be the day he died. Today, his work can be found hanging alongside masters such as Matisse, Braque and Léger in several public collections including the Centre Georges Pompidou, The National Museum of Modern Art in Paris, National Museum of Western Art, Tokyo, Bernanrd Buffet Museum, Nagaizumi, Japan and Tate Gallery, London.