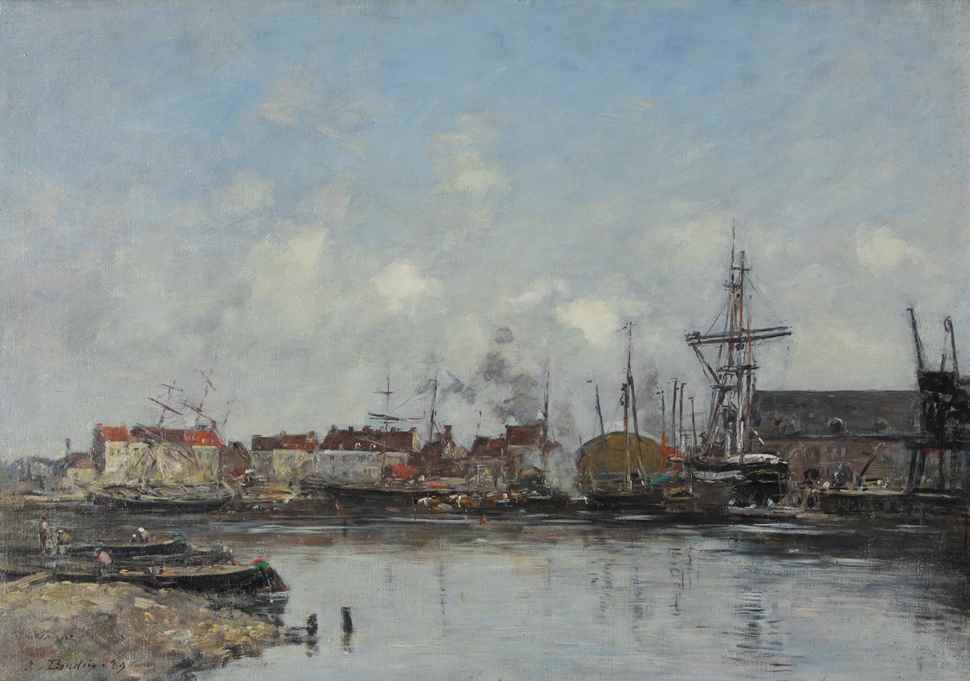 Best known for his distinctive marine works, Eugène Louis Boudin was a pioneer of outdoor painting and is regarded as one of the great inspirations to the Impressionist movement. As the son of a sea captain, Boudin spent his early years working on his father’s steamboat, in Honfleur, Normandy, which prompted a lifelong passion for the sea. In 1835, his father moved to Le Havre to open a framing shop, and following in his footsteps, Boudin later opened his own. Artists such as Jean-François Millet and Constant Troyon had their work exhibited in the shop and encouraged Boudin to take up painting. By the age of twenty-two, Boudin decided to become a full-time painter and relocated to Paris where he studied artworks by visiting the Louvre.

Largely self-taught, Boudin’s artistic education consisted of interactions with artists living or working in Paris at the time, including Dutch painter Johan Jongkind, who motivated him to paint outdoors. It was in this period that he met several members of the Barbizon school including Théodore Rousseau and Jean-Baptiste-Camille Corot, whom he was introduced to by Millet. The artists of the Barbizon school painted landscapes and rural scenes and mainly worked en plein air. Inspired by their approach and choice of subject, Boudin began working directly from nature. He often visited the coast of Normandy and Brittany, staying in Trouville or Deauville over the summer, and depicting animated scenes of ships at sea, local washerwomen and fishermen and his iconic images of ladies on the beach. Boudin set about capturing the light, weather and time of day in his paintings, with his emotive depiction of skies earning him the title ‘King of the skies,’ by Corot.

Throughout the 1860s, Boudin often finished his paintings in the studio, however, most of his later works were completed entirely en plein air. Discussing his methods, Boudin famously stated; ‘everything that is painted directly has a strength, a power, a vivacity of touch which one cannot recover in the studio.’ Boudin’s approach to painting anticipated the Impressionist movement and their desire to capture the transient effects of weather and light. Boudin’s influence on the Impressionist movement can be traced to his friendship with Claude Monet, whom he met in 1857 when Monet was 18. Boudin encouraged Monet to paint landscapes and observe the effects of light on water. In a letter to Frédéric Bazille while in Honfleur, Monet paid tribute to Boudin’s influence; ‘Boudin and Jongkind are here, we get on marvellously. There’s lots to be learned and nature begins to grow beautiful.’ In 1874, Boudin exhibited at the first Impressionist exhibition alongside Monet and his younger contemporaries. In the following years, Boudin preferred to submit his work at the official Salon but maintained close ties with the Impressionists.

Although Boudin enjoyed early commercial success, he received little recognition until 1888 when the French government bought some of his works to hang in the Luxembourg Gallery. The following year he was awarded a gold medal at the Exposition Universelle, and in 1892, at the age of 68, he was made a knight of the Légion d’Honneur. Today, Boudin is remembered as an important influence on the early Impressionists and an artist who bridged the transition from nineteenth century naturalism to late nineteenth century Impressionism. Recognised for his impact on the development of twentieth century art, Boudin’s work is highly collectable. As well as being found at the Musée Eugène Boudin in Honfleur, his famous waterscapes can be seen in the most prestigious museum collections worldwide including the National Gallery of Art, Washington; the Musée d’Orsay, Paris; and the National Gallery, London. He continues to enjoy great popularity, with his auction record of $3,000,000 achieved in March this year.