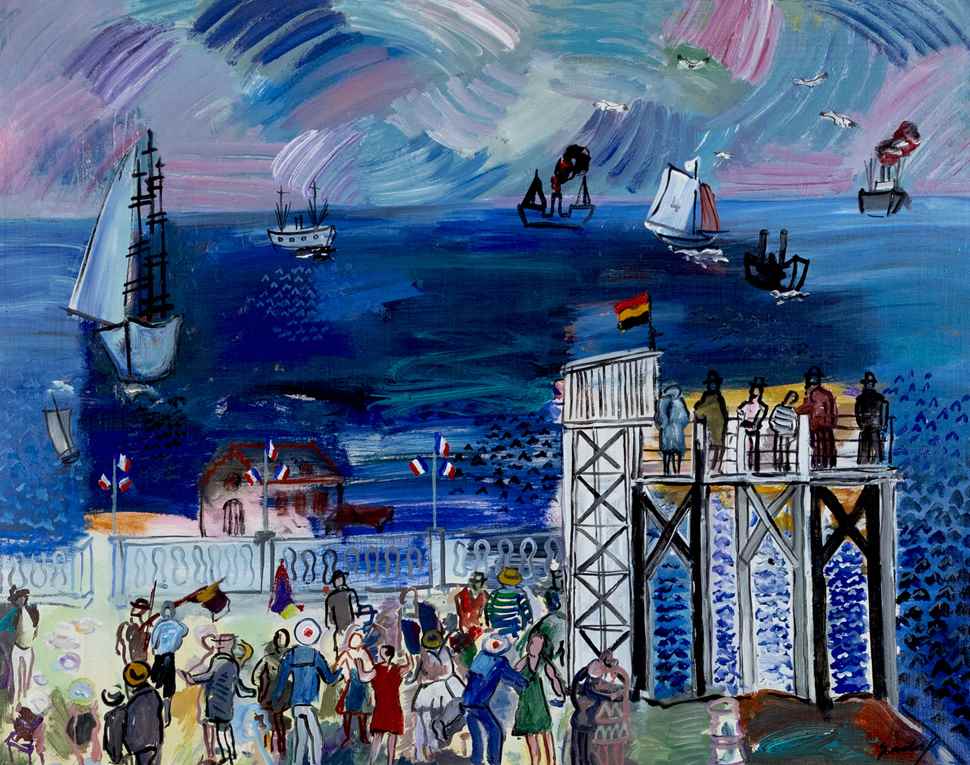 Carlos Nadal was born in Paris on 24 April 1917. His parents, both of Spanish origin, lived on Rue des Ecoles near Boulevard Saint Michel in the Latin Quarter, a neighbourhood home to intellectuals, students, and artists. From an early age, Nadal was exposed to the work of Maurice Utrillo, Raoul Dufy and Henri Matisse, all of whom became important influences for the artist throughout his career.

Following the family’s return to Barcelona in the 1920’s, Nadal began work as an apprentice at his father’s decorative paint shop. This experience provided him with a practical artistic foundation, and in 1936, Nadal was awarded a scholarship from the Barcelona City Council to study fine arts at the Escuela Superior de Bellas Artes de San Jorge (currently known as the Facultad de Bellas Artes).

At the time, Spain was a country of unrest, with the Spanish Civil War lasting from 1936 to 1939. After fighting alongside the Republicans on the fronts in Aragon and Tremp, Nadal was taken prisoner. He spent several months at Saint Cyprien concentration camp, escaping only temporarily before he was arrested again. After his release, Nadal returned to Barcelona and remarkably, he was able to return to his fine arts studies.

In 1946, Nadal fulfilled his dream of returning to Paris, after the General Consul of Spain in France issued him a certificate of nationality. Nadal moved into the Spanish College at Boulevard Jourdan 9 in Paris and began his studies in the atelier of Ossip Zadkine. It was here that Nadal met his wife-to-be, Belgian art student Flore Augusta Zoe Joris. Although his academic training took place mainly in Barcelona, it was during his time in France and Belgium that he developed his Fauvist essence.

In 1949, Nadal was offered a US scholarship by the Carnegie Foundation but instead chose to marry Flore, by now a sculptor, moving with her to Brussels. Here, he signed a contract with art dealer Louis Manteau and met the legendary surrealists Paul Delvaux and René Magritte.

Louis Manteau allowed Nadal to use his house on the Cote d'Azur near Villauris, and there Nadal painted many of his Mediterranean works. It was also here that Manteau introduced Nadal to Picasso and the two Spaniards became good friends, sometimes visiting Matisse, who was by now unwell. While his early style mainly reflected was scenes in Spain or Belgium, as he began to travel more extensively, his work often featured modes of transport and leisure scenes.

During the late 1950’s, Nadal received two major commissions; one in 1957 to decorate the Belgian Pavilion at the World Fair in Switzerland and another in 1958 to paint a large continuous mural for the Belgian Congo Transport Company at the Universal Exhibition in Brussels.

By the 1960’s, Nadal was in great demand for exhibitions in Europe, and he had enough money to build his own studio and summer house near Barcelona. After several shows in the provinces, the Harrogate International Festival invited Nadal to hold a retrospective in 1984. An exhibition followed in 1987 at the Solomon Gallery, in London.