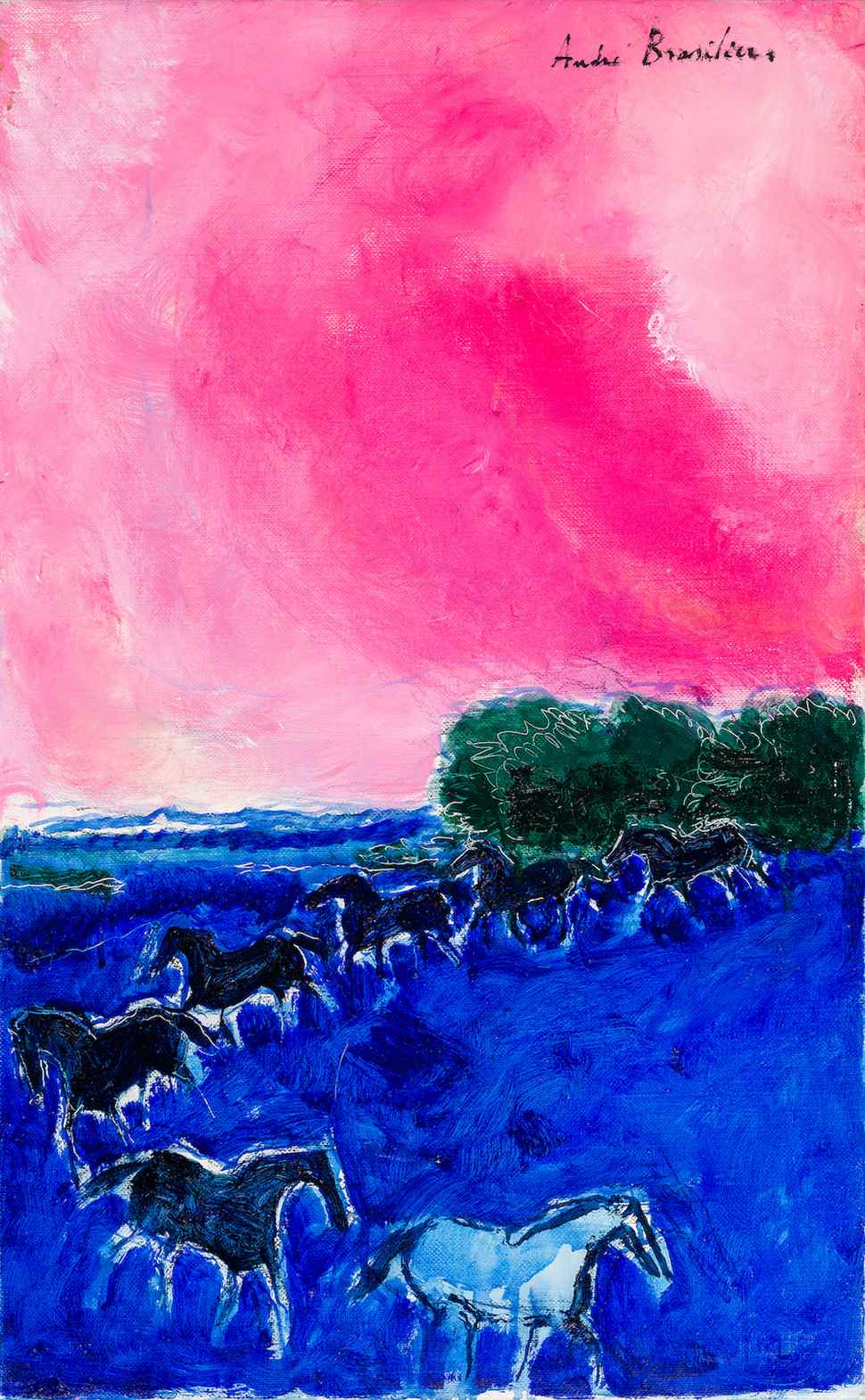 Born to artist parents in the region of Anjou in France, André Brasilier was immersed in an artistic milieu from an early age. His father, Jacques Brasilier (1883-1965) was a symbolist painter. Following his parents’ footsteps, he attended the École des Beaux-Arts to study with the French painter Maurice Brianchon. In 1954, he was awarded the Grand Prix de Rome, allowing him to study at the Académie de France in Rome.

Amongst his main sources of inspiration, Brasilier lists Gauguin, Bonnard and Matisse. However, he is first and foremost inspired by nature and the human form. Indeed, his most recurrent subjects include pastoral scenes inspired by the landscape of his native Anjou, the sea, women and horses. He treats these subjects with an airy and dream-like quality, using cool, soft pastel colours. Although he studies his subjects from nature, he is not a figurative painter, and his figures on the canvas have been abstracted and simplified. His insistence on simplicity reflects the influence of Japanese artists. He says; “I always try to give the quintessence of a subject with little effect, to say a lot with a little.”

Despite their simplicity, Brasilier’s cavalcades and horse paintings are filled with a sense of movement. His horses are depicted both with and without their riders, in forests or on the beach. He favours large formats and uses broad, bold brushstrokes to capture movement in his paintings, claiming; “when I paint, I want to feel life in my movements.” Another recurrent subject of his paintings is the figure of a woman. She is none other than his wife, Chantal, his greatest muse and most permanent source of inspiration.

Since his first solo exhibition at the Galerie Drouet in 1959, in which he depicted musical scenes, Brasilier has been honoured with over one hundred solo exhibitions across seven countries, including two major retrospectives at the State Hermitage Museum in St Petersburg and the Museum Haus Ludwig für Kunstausstellellunhen Saarlouis in Germany. In addition to producing paintings, drawings and watercolours, his non-pictorial repertoire has included ceramics, mosaics and theatrical scenery and costumes for the Opéra Garnier de Monte Carlo. Brasilier’s work is highly sought after by collectors worldwide, with a very strong collector base in Asia.