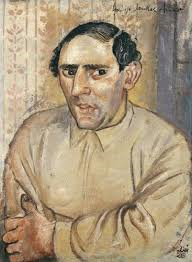 Otto Dix, 'This is Jankel Adler', 1926
Jankel Adler was born in Lodz, Poland and lived a life of wandering.

In 1986 the Tel-Aviv Museum showed a large retrospective exhibition of his works in conjunction with the Dusseldorf Museum and the Stuky Museum in Lodz.
Read more