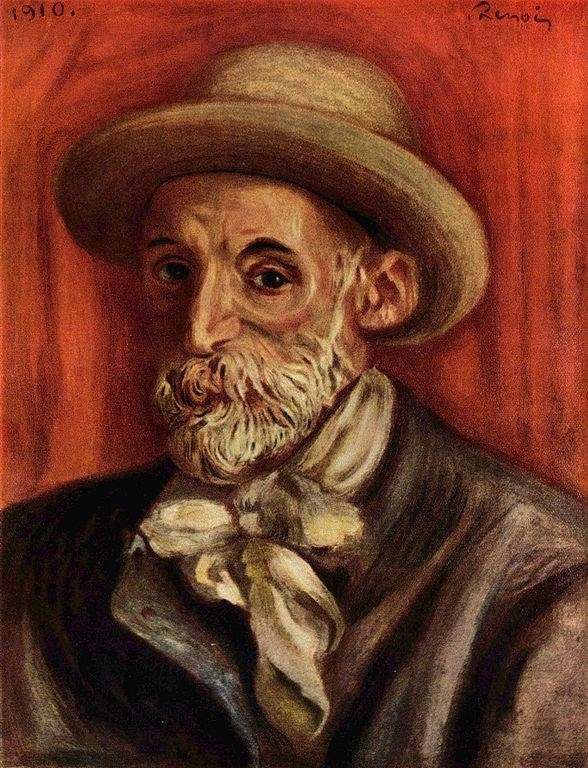 Pierre-Auguste Renoir, 'Self-Portrait', 1910, Private Collection
Renoir began his artistic career as a porcelain painter but began copying paintings at the Louvre in 1860 and eventually entered the studio of Charles Gleyre, where he met Claude Monet, Frédéric Bazille, and Alfred Sisley. The four friends began painting in the forest of Fontainebleau, although Renoir always remained dedicated to figure painting and portraits influenced by Gustave Courbet.

In the summer of 1869, Renoir painted for two months alongside Monet at La Grenouillère outside Paris. After several of his paintings were rejected by the Salon in the early 1870s, he decided to join Monet in establishing the Impressionists, who sought to capture modern life including everyday people, streets, and surroundings.

Renoir's penchant for portraiture attracted the attention of a range of patrons with avant-garde sensibilities and sustained him financially. His doubts about the spontaneity and impermanence of the Impressionist aesthetic led him to refuse to participate in the fourth Impressionist exhibition in 1878. Instead, he decided to look back to the old masters, leaving for Italy in 1881 to continue his self-education in the 'grandeur and simplicity of the ancient painters.' He returned enamored of Raphael and Pompeii and his figures consequently became more crisply drawn and sculptural in character.

By the late 1880s and early 1890s, Renoir had shifted his investigation of the old masters from linear classicism to the colouristic traditions of Titian and Rubens as well as the unabashedly sensual beauty of eighteenth-century French art such as the nudes of Rubens and Fragonard. Renoir's most important series of the decade came from an invitation by the French government to execute a painting for the Musée du Luxembourg, a new museum devoted to the work of living artists. Renoir made five versions of Two Young Girls at the Piano for the Minister of Fine Arts to choose from; the version in the Metropolitan's Robert Lehman Collection is one of the finest. The subject of girls at a piano recalls eighteenth-century French genre scenes, especially those of Fragonard.

In the early twentieth century, despite old age and declining health, Renoir persisted in artistic experimentation. He took up sculpture and continued to paint portraits attesting to his continued admiration of Renaissance art. Renoir was also drawn to an arcadian ideal of Mediterranean classicism in his art. This artistic preoccupation is nowhere more apparent than in his twentieth-century bathers. The Rubenesque nudes he had been painting reached a level of unprecedented exaggeration in the twentieth century, culminating in the massive Bathers at the Musée d'Orsay.
Read more