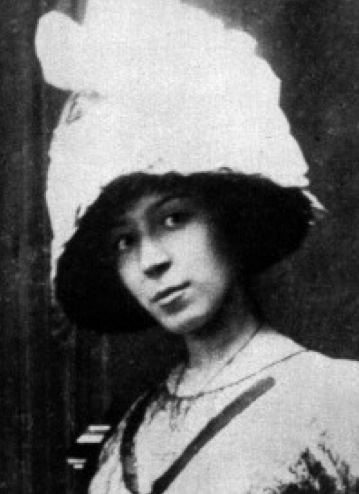 (credits: anonymous)
French painter and printmaker Marie Laurencin was born in Paris and studied porcelain painting at Sèvres and oil painting at Académie Humbert in Paris.

An important member in the Parisian Cubist and the Section d’Or groups during the early twentieth century, Laurencin exhibited at the Salon des Indépendants and the Salon d’Automne. Developing a unique approach to abstraction, from about 1910 her palette became paler and her subject matter emphasised a distinctive and enchanted world; a ‘feminine aesthetic’ of pastel colours and curvilinear forms.

Laurencin was a friend and associate of Pablo Picasso, Georges Braque, Albert Gleizes, Robert Delaunay and Francis Picabia. Bisexual, she was romantically involved with both the French poet Guillaume Apollinaire and the American writer Natalie Clifford Barney. Upon the outbreak of the First World War - and married to German-national Baron Otto von Waëtjen (from who she was divorced in 1920) - Laurencin and her husband were exiled to Spain.

Returning to Paris in 1921 as single woman and a French citizen once more, Laurencin painted portraits of Parisian celebrities and produced theatrical sets of the Ballets Russes. She also illustrated books, such as André Gide's La Tentative Amoureuse and Lewis Caroll's Alice in Wonderland. During the 1930s she also worked as an art teacher.

In 1983, upon the centenary of her birth, the Musée Marie Laurencin opened at Nagano-Ken in Japan, where over five-hundred of her works are held.