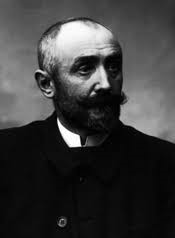 (credits: anonymous)
Henry Moret was born in 1856 in Cherbourg, France, in the Manche region of Normandy.

Little is known of Moret's life until he began his military service in 1875. Jules La Villette, his commander in Lorient, who first noticed his artistic talents, introduced him to Ernest Corroller, a drawing teacher and marine painter. Corroller taught him the art of landscape painting as practiced by masters such as Corot and Courbet, enabling him to register at the École des Beaux-Arts in Paris where in 1876 he studied under Rudolf Lehmann, Jean-Léon Gérôme and later, from about 1880, under the history painter Jean-Paul Laurens

In 1888, he arrived in the Breton town of Pont-Aven which had begun to attract a number of artists including Ernest de Chamaillard, Émile Jourdan, and Charles Lavant,.with Paul Gauguin playing the leading role. Moret was one of the first painters to move to nearby Le Pouldu which soon became the new centre of attraction for the Pont-Aven artists and his work began to show signs of Symbolism, probably as a result of Gauguin's influence.

After Gauguin left the area in 1891, Moret began to develop his own style. In 1895, he established a fruitful relationship with Paul Durand-Ruel who maintained a number of galleries in Paris, London and New York, with an emphasis on Impressionism. During their relationship, Moret completed over 600 paintings, many of which were exhibited in Paris and New York leading to a growing clientele for his work. Moret also exhibited seven of his Breton paintings at the Salon des Indépendants.

After 1900, Moret became more immersed in Impressionism, applying small flecks of paint to his work rather than the broad strokes favoured by the Pont-Aven artists. Increasingly he focused on landscapes where his light effects can be seen in the sunsets and storm scenes he painted around 1909. In addition to his oils for Durand-Ruel, he also completed some 800 watercolours and drawings before his death in Paris in 1913.