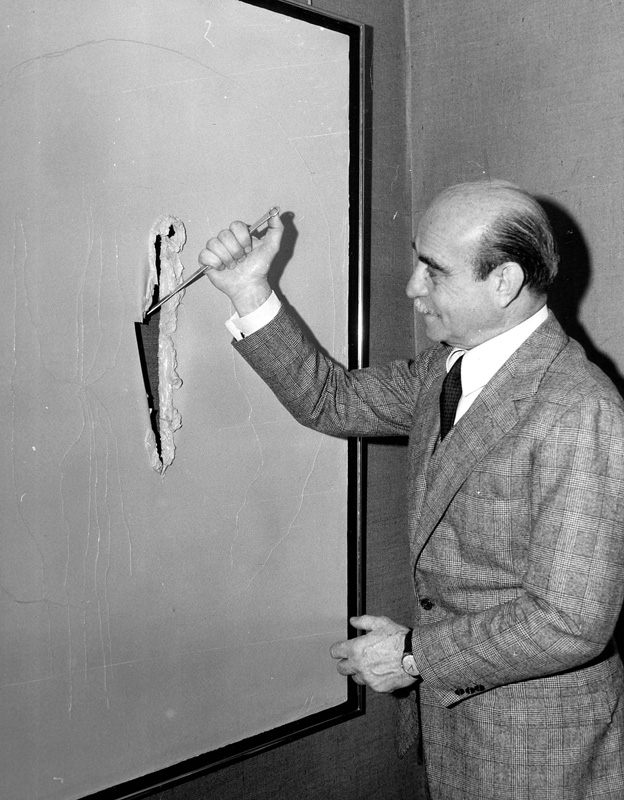 Credit: Phaidon
Italian artist Lucio Fontana was born and brought up in Argentina, beside the great Paraná River, son of the Italian sculptor Luigi Fontana. A graduate of the Accademia di Belle Arti di Brera in Milan, in 1930 he exhibited for the first time at Milan’s Il Milione Gallery before joining the Abstraction-Création group of artists in Paris. In 1939 he also joined the expressionist group of artists in Milan named ‘Corrente’.

After spending the Second World War in Buenos Aires, Fontana returned to Europe in 1947 and developed his five ‘Spatialist’ manifestos. The works in his studio in Milan had been destroyed during the Allied bombings of Milan. From 1949 he began producing his most famous works of art: Concetto Spaziale (‘Spatial Concept’) – punctured canvases of buchi (holes) and tagli (slashes). A response to the political and artistic climate of post-war Europe, Fontana conceived of his - often highly layered - canvases as sculptures to be ‘defaced’ with these gestures. Developing expressive abstraction in new and radical directions – insisting on the importance of art whilst also suggesting its demise – he would later begin ‘slashing’ terracotta clay to further demonstrate his unified aesthetic.

In 1961 Fontana exhibited alongside Mark Rothko and Sam Francis at the Palazzo Grassi in Venice, incorporating famed Murano glass into work that transferred later that year to the Martha Jackson Gallery in New York City. Exhibited to critical success at the Venice Biennale (1966), Kassel’s Documenta IV (1968) and at the Finch College Museum in New York City (1968), one of his last works Trinity (1966) is a triptych of decoratively perforated ‘white’ canvases that consciously provoke a curiously jarring response – both calming and unsettling.

Fontana’s work now features in international museums across Europe and the United States, retrospectives having most recently been staged at the Guggenheim in Venice (2006) and MAMVP in Paris (2014).