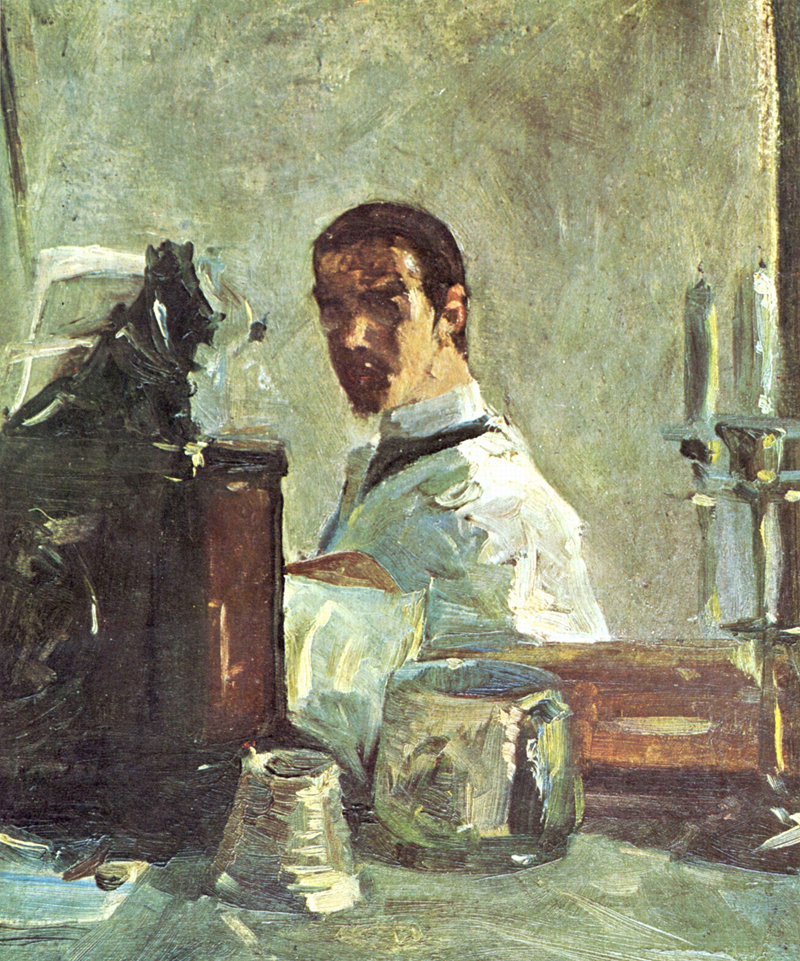 Self-portrait, 1882-3
Henri-Marie-Raymonde de Toulouse-Lautrec-Monfa known as Henri de Toulouse-Lautrec born in 1864 in Albi, France from an aristocratic family, was one of the leading Post-Impressionists painters and major figure in late 19th and early 20th century French art.

From the age of 10, Lautrec started sketching and after serious health problems, related to a congenital bone disorder, he was confined to his bed and continued to draw daily. His parents took notice of his talent in drawing and painting so they asked their artist friend René Princeteau to give informal lessons.

Lautrec first visited Paris in 1872, however, it is in 1882 when he moves from Albi to Paris. He starts studying in the ateliers of two academic painters Léon Bonnat in 1882 and Fernand Cormon in 1883. From 1884, he set up his own studio close to his subjects of inspiration which were the Parisian scenes and Bohemian life of Montmartre where he began to paint 'en plein air' like the Impressionists. He specialised in depicting with great observation the lifestyle of Parisians in Montmartre and painted portraits of artists, prostitutes and entertainers in the famous cafés, brothels and cabarets such as the Moulin Rouge where he was commissioned to produce a series of posters. This led him to great acclaim and popularity.

Lautrec’s style was influenced by artists such as Edgar Degas and Van Gogh and inspired by Japanese ukiyo-e wood prints. His simplification of outlines and application of colour created movement in the depicted nightlife. He was a master at painting crowds, intimate scenes and portraits.

With a lot of health problems and family trauma Lautrec turned to alcohol to deal with his pain. He was institutionalised for his alcoholism to a sanatorium in Neuilly-sur-Seine. He died in 1901 at the Château Malromé in Saint-André-du-Bois at the age of 36.

In a short career, Lautrec painted 737 paintings, 350 lithographic posters and illustrations and over 5000 drawings. He influenced artists such as Pablo Picasso and Andy Warhol and his mother continued promoting his art after his death. In 1922 the Toulouse-Lautrec Museum was inaugurated in the prestigious setting of the Palais de la Berbie, France.
Read more