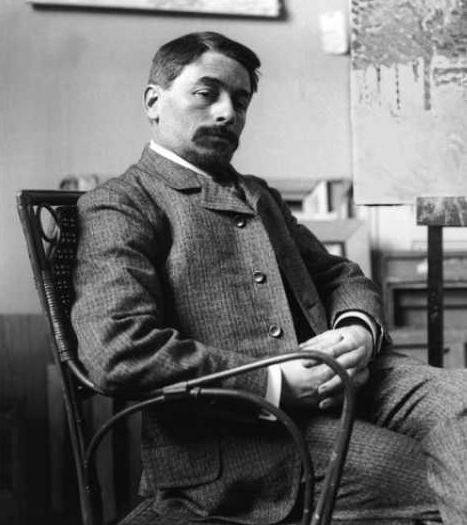 Henri Lebasque c.1900. Photo credit: Paul François Arnold Cardon a.k.a. Dornac (1858–1941)
Henri Lebasque was a French Post-Impressionist painter born in 1865 in Champigné, France. He is best known for his fauvist style landscapes, interiors and intimate scenes. He began his art education at the Ecole régionale des Beaux-Arts d’Angers. Lebasque moved to Paris in 1886 where he met both Camille Pissarro and Auguste-Pierre Renoir, who later would have a large impact on his work. Lebasque acquainted the Intimist painters Edouard Vuillard and Pierre Bonnard who inspired his vision and George Seurat and Paul Signac taught him the importance of colour theory.

The artist was integral to the post-impressionist movement, where after learning from Impressionists themselves, he set out alongside Henri Matisse, Albert Gliezes and Jacques Villon, who were amongst the founding members of the Salon d’Automne in 1903. He continued to exhibit at the Salon des Independents, most notoriously with Matisse and the Fauves in the 1905 exhibition that gave the French Expressionists the name ‘Fauve’ meaning wild beast and dubbed by Louis Vaucxelles. The women he depicts are sensuous and are set amongst beautiful gardens and rural settings. He is known for his intimate nudes, and his mastery over the capturing of light that falls through the canopy of trees and shrubs onto his subjects.

His move to the French Riviera seeking its source of light provided a transformation in his palette that would last in all his paintings, displaying an abundance of light and colour. Lebasque moved to Cannes with Matisse and Bonnard as his neighbours in 1924. The artist had great commercial success and was wildly popular during his lifetime. He was described as “the painter of joy and light”.

His works are held in collections of the Musée d’Orsay, Paris; the Museum of Modern Art, New York; the National Gallery of Washington, D.C.; the National Museum of Western Art, Japan among others.
Read more