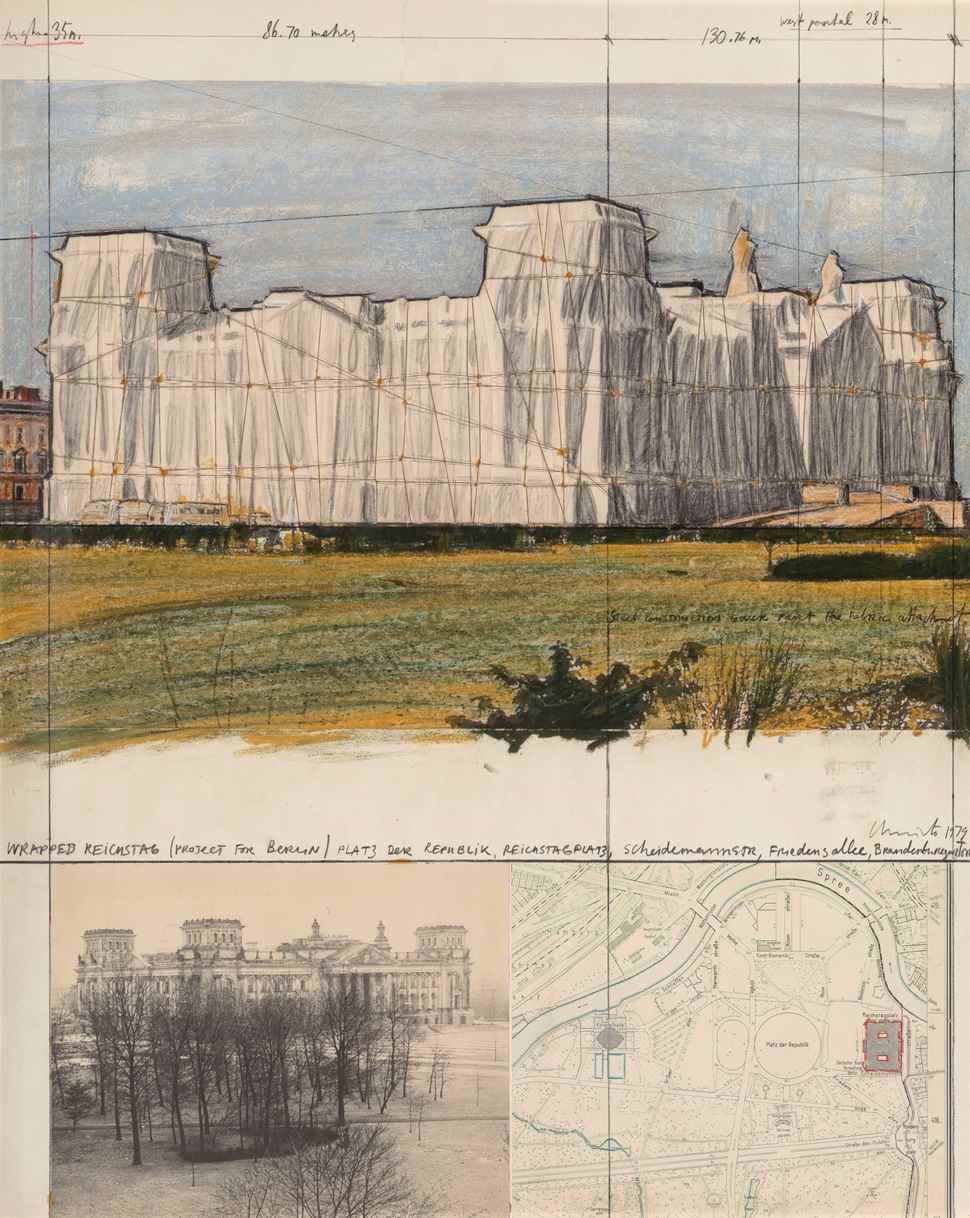 Christo Javacheff was born in 1935 in Gabrova, in Communist Bulgaria. Dropping his surname, Christo studied at the Fine Arts Academy in Sofia (1953–56) before defecting to the West, via Prague, in 1957. That year, he spent one semester at the Akademie der Bildenden Künste in Vienna and moved to Paris in 1958 where he met his future wife and artistic collaborator, Moroccan-born Jeanne-Claude de Guillebon (d. 2009).

Indebted to Vladimir Tatlin's Constructivist edict "real materials in real space," Christo's first artworks, dating from 1958, consist of appropriated everyday objects such as bottles, cans, furniture, and oil drums wrapped in canvas, bundled in twine, and occasionally overlaid with automobile paint. His first solo exhibition, at Galerie Haro Lauhus in Cologne in June 1961, included his inaugural collaboration with Jeanne-Claude (though she would not publicly acknowledge her role in their creations until 1994), Dockside Packages - a collection of draped oil barrels and rolls of industrial paper arranged outside the gallery along a dock. That same year, the couple made their first attempt at exploring their aesthetic vocabulary on a monumental scale with Project for a Wrapped Public Building. For the piece, they proposed shrouding an unspecified parliamentary edifice - the quintessential symbol of public architecture - in fabric tied down with metal cables. Never realized, the project exists in the form of a photographic collage with an explanatory text by the artists.

Throughout the 1960s, Christo and Jeanne-Claude outlined proposals for similar projects, often involving iconic buildings, like the École Militaire station of the Paris Métro (1961). They saw their dreams come to fruition in the summer of 1968, when they received permission to carry out three of their undertakings: Wrapped Fountain and Wrapped Medieval Tower (both at Spoleto in Italy) and Wrapped Kunsthalle (at Bern in Switzerland). The following year, they cloaked both the Museum of Contemporary Art in Chicago and a mile-long section of the Australian coastline at Little Bay, north of Sydney. Covered with vast quantities of light-coloured fabric, battened down using elaborate systems of cables, ropes, and knots, these architectural and natural forms were de-familiarised, transformed into ghostly presences, momentarily disrupting the surroundings.

Beginning in 1970, the artists executed numerous other projects, all of which became icons of environmental art: Valley Curtain in Colorado (1970–72) a curtain of orange nylon suspended across a valley; Running Fence in California (1972–76) more than twenty-four miles of white nylon fabric snaking across the countryside; Surrounded Islands in Florida (1980–83) around six and a half million square feet of bright pink fabric floating around eleven islands; The Pont Neuf Wrapped in Paris, (1975–85) honey-hued fabric shrouding the city’s oldest bridge; The Umbrellas in Japan and USA (1984–91), a scattering of 3,100 blue and yellow umbrellas in a valley in California and Japan; Wrapped Reichstag in Berlin (1971–95), the celebrated German government building swathed in silver fabric; and The Gates in New York City’s Central Park (1979–2005), more than 7,500 metal frames fitted with saffron fabric panels and arranged along some twenty-three miles of walkway. Due to the staggering cost and increasing complexity of these ventures, realization often took years, even decades.

Christo also conceived of solo projects, some of which only exist on paper. The pieces would often use found objects—from magazines, newspapers, and street signs, to nude female models, telephones, computers, and automobiles—wrapped in fabric or plastic and then twined. These assemblages embody many of the themes Christo and Jeanne-Claude explored in their artistic partnership, among them the opposition between the familiar and the uncanny, the veiled and the exposed, the built and the natural environments, utility and futility, permanence and ephemerality.

Major exhibitions of the artists' work have been organized by the Institute of Contemporary Art in Boston (1979), Museum Ludwig in Cologne (1981), Hiroshima City Museum of Contemporary Art (1990), Martin-Gropius-Bau in Berlin (2001), and the Metropolitan Museum of Art in New York (2004). Jeanne-Claude died in 2009 and Christo in 2020. Since their passing, their artistic legacy has been continued, with ongoing projects realised posthumously through their detailed plans. Most recently, 2021 saw a monumental Parisian landmark, The Arc de Triomphe de l'Étoile, transformed through L'Arc de Triomphe Wrapped – a spectacle which stunned citizens globally. Another project The Mastaba of Abu Dhabi (Project for United Arab Emirates), is in the process of being realised and when completed, stands to be the largest permanent work of art on the globe. Conceived in 1977, the piece will be the only permanent, large-scale public artwork by the couple, and will serve as both an homage to the United Arab Emirates, whilst commemorating their combined artistic genius.