Exhibition: Impressionists in London at the Tate Britain 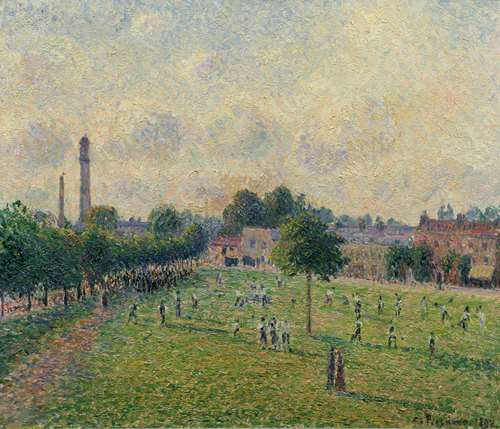 We are delighted to share with you the Tate Britain’s EY Exhibition: Impressionists in London, French Artists in Exile (1870 – 1904). The show presents the largest number of works from Claude Monet's famous Houses of Parliament series, never before seen watercolours by James Tissot, regattas by Alfred Sisley as well as Camille Pissarro's views of Kew, shown in the UK for the first time.

The exhibition sheds light on the important relationships forged between artists, patrons, teachers and dealers in London during the late 19th and early 20th century  and celebrates British culture and social life. Visitors will find themselves instantly recognising views of the city painted by émigré French artists. This move played an important part in forging their careers and artists such as  Monet  and  Pissarro  met the dealer Durand-Ruel, who as Monet  described, saved them from starving.

The views of Kew by Camille Pissarro, both on loan from private collections, include a view of St Anne's church painted in June 1892 during  Pissarro's third visit to England at the age of 62.  Pissarro  stayed nearby at Gloucester  Terrace with the purpose of painting Kew without having to commute from London. Interestingly, despite the Impressionist's tendency to paint  en plein air,  Pissarro  completed these indoors through his apartment window to avoid the summer rain.  Kew Green was a stark contrast to the more formal French gardens where in many, walking on the grass was not allowed. Amongst his contemporaries,  Pissarro's Kew Garden series was highly regarded, in particular, his painting of rhododendrons.

Watercolours by  Tissot  depict scenes from the Franco-Prussian war, the very reason many of these artists moved to London, seeking refuge. The final and largest room in the exhibition is dedicated to the river Thames, in which viewers can see the changing of the seasons, the infamous fog and various views that encapsulate London. The exhibition charts the stories of these French artists and considers carefully the aesthetic impact of London.