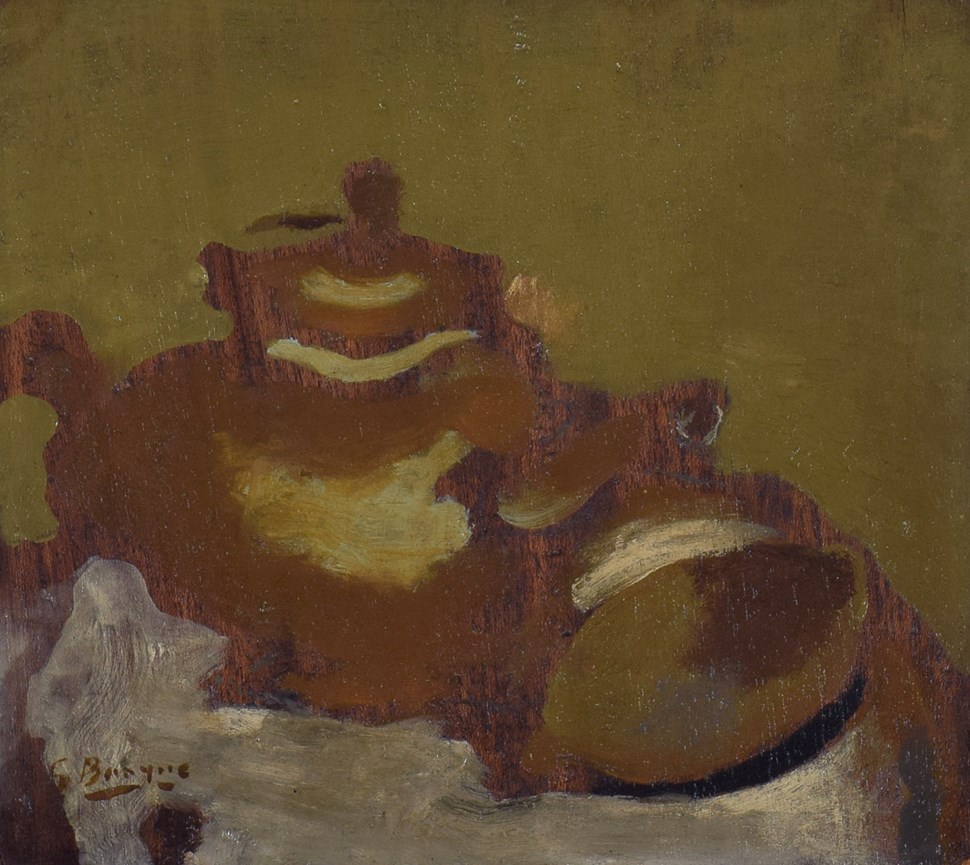 Painter, collagist, draughtsman, printmaker and sculptor, associated with the Ecole de Paris, Georges Braque was born on May 13, 1882, in Argenteuil-sur-Seine, France. He grew up in Le Havre and studied evenings at École des Beaux-Arts from circa 1897 to 1899. He left for Paris to study under a master decorator and receive his craftsman certificate in 1901. From 1902 to 1904, he painted at the Académie Humbert in Paris, where he met Marie Laurencin and Francis Picabia.

By 1906, Braque’s work changed from an Impressionist to Fauve sensibility; through his friendship with Raoul Dufy and, after spending the summer in Antwerp with Othon Friesz, he began to paint landscapes. Braque showed his Fauve work at Salon des Indépendants in Paris the following year. In 1907-8, influenced by Paul Cézanne as well as Pablo Picasso's Demoiselles d'Avignon, Braque started to use a more restrained palette of greens, browns and greys, simplified his forms, and painted his first Cubist pictures. His first solo show was at Daniel-Henri Kahnweiler’s gallery in 1908.

From 1908/9 to 1912, Picasso and Braque worked together in developing Analytical Cubism; by 1911, their styles were extremely similar. Braque's paintings of 1908–1913 reflected his new interest in geometry and simultaneous perspective. He studied the effects of light, perspective and technical means used to represent these effects, questioning artistic conventions. In his village scenes, for example, Braque reduced architectural structures to geometric forms approximating a cube, yet rendered shading so they look both flat and three-dimensional.

In 1912, Picasso and Braque started to incorporate collage elements into their paintings and to experiment with the papier collé (pasted paper) technique, formulating Synthetic Cubism. Their artistic collaboration lasted until 1914. Braque served in the French army during World War I and was wounded; upon his recovery in 1917, he began a close friendship with Juan Gris. At this time, he created The Musician (1917-18, Kunstmuseum, Basel).

After World War I, Braque’s work became freer and less schematic. His fame grew in 1922, after an exhibition at the Salon d’Automne in Paris. In the mid-1920s, Braque designed the decor for two Sergei Diaghilev ballets. His favourite genre, however, remained still life. By the end of the 1930s, Braque had returned to a more realistic interpretation of nature. In 1931, he made his first engraved plasters and began to portray mythological subjects. His first important retrospective took place in 1933 at the Kunsthalle Basel. In 1937, he produced Woman with a Mandolin (1937, MoMA, NY) and won first prize at the Carnegie International, Pittsburgh.

During World War II, Braque remained in Paris, and his paintings became more sombre. He also made lithographs, engravings and sculptures. From the late 1940s, he treated various themes such as birds, ateliers, landscapes and seascapes. In 1954, he designed stained glass windows for the church of Varengeville. During his last years, Braque’s ill health prevented him from undertaking large-scale commissions, but he continued to paint, make lithographs, and design jewellery.