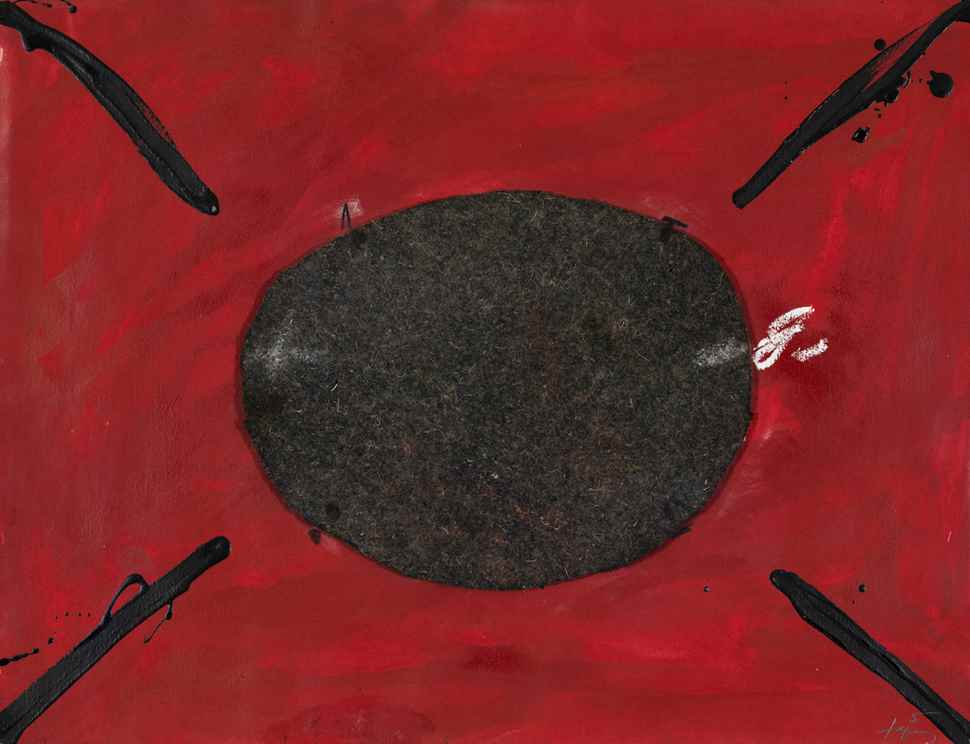 Spanish painter, sculptor and theorist Antoni Tàpies is one of the most famous European artists of his generation. Born in Barcelona to a politically active lawyer, Tàpies grew up immersed in Catalan nationalist culture. During the Spanish Civil War (1936–39) whilst a student at the German School of Barcelona, Tàpies taught himself to draw and paint. As a seventeen year old, he suffered a near-fatal heart attack as the result of tuberculosis that resulted in a two-year convalescent in the mountains, reading widely and pursuing his interest in art.

After a three-year stint studying law, from 1943 Tàpies devoted himself to art, soon experimenting with differing materials and becoming the best-known Catalan artist to emerge from the Second World War. In 1948, Tàpies helped co-found the first Post-War Movement in Spain known as "Dau al Set” which was connected to both the Surrealist and Dadaist Movements. Initially influenced by Paul Klee and Joan Miró, soon Tàpies began working in a style known as pintura matèrica in which non-artistic materials are incorporated into the paintings. This work in mixed media is generally considered his most original contribution to modern art. Increasingly interested in Eastern and French Existentialist philosophy, on a French government scholarship in the early 1950s he was able to move to Paris. Here he played at adding paint to clay and marble dust, even using waste paper, string, and rags such as his Grey and Green Painting (1957). His Canvas Burned to Matter (c.1960) is an example of these mixed media assemblages that combine the principles of Dada and Surrealism. Influence by Pop Art, Tàpies began to incorporate more substantial objects into his paintings, such as parts of household furniture.

From the late 1950s to early 1960s Tàpies worked with many other Spanish 'Informalist' artists. His work of the early 1970s is preoccupied with suppressed symbols of Catalan identity (cultural and political anathemas to Spanish dictator General Franco). In 1974 he made a series of lithographs called Assassins and displayed them in the Galerie Maeght in Paris, in honoured memory of Salvador Puig Antich, critic of the Franco regime. His paintings of the 1970s and 1980s also reveal his interest in meditative emptiness, for example in spray-painted canvases with linear elements suggestive of Oriental calligraphy, in mixed-media paintings that extended the vocabulary of “Art informel” and in his oblique allusions to imagery within a fundamentally abstract idiom as in Imprint of a Basket on Cloth (1980).

Alongside his production of pictures and objects Tàpies was active in the field of interdisciplinary collaborative graphic work gravitating toward unconventional traditional processes and everyday vernacular imagery such as handprints and footprints as his subject matter. His print work disrupted traditional concepts of 'high' art and 'low' art, often involving earthy materials like as straw, sand, and dirt. To achieve his innovative techniques, Tàpies worked with specific publishers and printmakers who were inspired by his unique ideas. His worldwide influence in the realms of painting, sculpture, etchings and lithography is extensive and his work is found in numerous major international collections, including his own foundation in Barcelona. Throughout the span of his life Antoni Tàpies was associated with several art movements and a member of none. However two years before his death, in recognition of his services to art, the King of Spain created him the first Marquess of Tàpies.