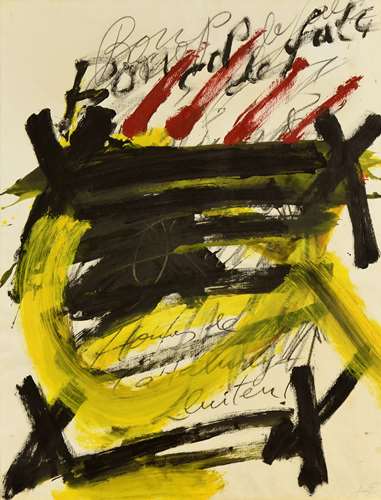 Lauded as one of the most famous European artists of his generation, Antoni Tàpies was born into a family of Catalonian nationalists. The present work is part of his epoch-making series Als Mestres de Catalunya (To the masters of Catalunya) and evokes a powerful political message.  Directly representing the struggle for Catalonian identity, Als Mestres de Catalunya No. 6 is inscribed:

The first line, taken from the Catalonian national anthem Els Segadors (The Reapers) dates back to the events of 1640 during the Thirty Years’ War between Spain, France, Austria and England. This war triggered the Catalan Revolt also known as the Guerra dels Segadors (Reapers’ War) and since the sickle has become a symbol of Catalonia.

Tàpies emerged after the Second World War with a focus on materials and an overt socio-political message, his work becoming internationally recognised by the 50s. From the early 70s, Tàpies’ oeuvre increasingly pays homage to his Catalan identity following his experience of the Spanish Civil war in 1936, abruptly ended Catalonian independence. General Franco who ruled over Spain as military dictator was anathema to Tàpies and his works acted as a protest as well as a manifestation of aesthetic modernity.

Tàpies produced mainly abstract works and was part of the famous Art Informel movement, his work also prefigures the Arte Povera movement in Italy and Post-Minimalism in the United States. Als Mestres de Catalunya No. 6 features the colours of the Catalonian national flag: vivid yellow, red and black stripes of oil paint mixed with whiting. The three ‘X’ marks visible in the work could be interpreted in multiple ways: cruciform shapes or perhaps the marking of a location. Throughout the 70s, Tàpies often used rudimentary symbols in his work, the connotations of which remain ambiguous.

Throughout his career Tàpies received numerous international prizes and distinctions, outstanding among which the Prince of Asturias Prize for Arts (1990) and the Velàzquez Prize for Plastic Arts (2003). In recognition of his lifelong contribution to art, King Juan Carlos I of Spain ennobled him with the hereditary title Marquess de Tàpies (2010). Tàpies relationship with the government and the monarchy is undoubtedly a difficult one, yet it is an example of their tolerance towards political modern art.

An enigmatic work, Als Mestres de Catalunya No. 6, continues to serve as part of a dialogue in Spain’s cultural and socio-political genome today.