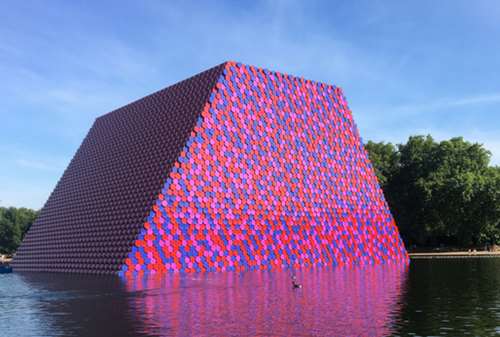 This summer London plays host to Christo’s Mastaba project, a 600-ton sculpture composed of painted oil barrels , which is currently floating on the Serpentine Lake in Hyde Park. The monumental sculpture opened to the public on June 18th after several weeks of preparation and has since delighted locals and visitors. The public are also able to enjoy a free exhibition at the Serpentine Gallery focusing on the artist’s history of using barrels including future plans for the Abu Dhabi Mastaba.

Each of the barrels is distinctively painted red, blue and purple, contrasting against the green of London’s Royal park. The term Mastaba was inspired by the ancient Egyptian word meaning “house of eternity” and is a type of trapezoidal tomb that preceded the ancient pyramids. As with all of Christo and his late wife Jeanne-Claude’s projects, the work is entirely self-funded through the sale of a limited number of original preparatory works.

The London Mastaba is the artists’ first major public project in the UK and provides a special opportunity to see one of the artists’ works close to home. To celebrate the Christo festivities in London, Stern Pissarro Gallery mounted an exhibition during June and July to celebrate 6 0 years of the artists’ work. Although 'Christo and Jeanne-Claude: A Life of Projects' has now ended, several of the important works remain on view at the gallery including the artist’s early Wrapped Objects from the 60s and his Floating Piers from 2016 in Lake Iseo in Italy.

Like Christo and Jeanne-Claude's other projects, t he structure in Hyde Park is temporary and will come down during the end of September 2018. The artists has reportedly promised to improve the lake and help its ecosystem once the project ends. Fans and admirers of Christo can look forward to the next project, most likely to be the Abu Dhabi Mastaba, which has been planned since 1979 and will be a up scaled version of the one currently in London.