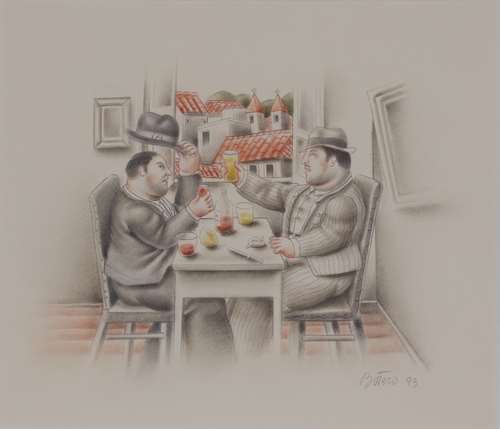 "In art, as long as you have ideas and think, you are bound to deform nature. Art is deformation."

Self-declared 'the most Colombian of Colombian artists', Fernando Botero has become one of the most celebrated living South American artists with his works found in private collections worldwide and in the permanent collections of many prestigious international museums including the Museum of Modern Art, New York and the Art Institute of Chicago as well as a museum dedicated to his work in Bogotá. Botero's monumental public sculptures populate some of the greatest cities such as the Avenue des Champs-Élysées, Paris; Broadgate, London; Park Avenue, New York; Forte Belvedere, Florence; and Paseo de la Castellana, Madrid.

Whilst he is most known for his paintings and sculptures, he also creates works on paper. These are more intimate and give us an insight into the artist’s creative process. Considerably more affordable than the other formats, our piece has also the advantage of being in colour as compared to the many black-and-white drawings available on the art market.

Realised in 1993, 'El Brindis' meaning 'The Toast' is a work on paper by Botero. Sitting on opposite ends of the table, two well-dressed men raise their full glasses in a spontaneous gesture of celebration. Behind them, a wide-open window reveals the rooftops of various houses and churches, framed by high mountains in the far distance. Botero used this setting to create a number of different works of two figures sitting on opposite sides of the table, one example being the ‘Card players’ which may well have been inspired by the famous series ‘The Card Players’ by French Post-Impressionist Paul Cézanne. Botero did say once: 'That's where real originality lies, in taking something that's already been done by someone and doing it differently.'

El Brindis is available to view in the gallery and to book an appointment please email us at stern@pissarro.com.