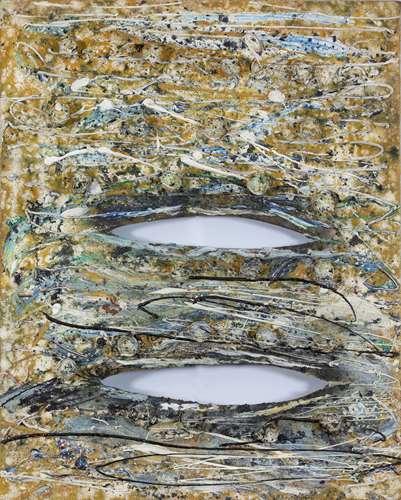 For this artwork spotlight, we have selected Composition by South-African artist Christo Coetzee (1929-2000). Receiving acclaim for his assemblage approach, today Coetzee is celebrated for his avant-garde work, informed by his global travels, and inspired by African, European, and Asian cultures. Christo lived in South Africa for 22 years and began his career in Johannesburg before receiving a scholarship to study art in London in 1951. Once he left South Africa, Christo went on to live in numerous countries across the world, including Italy, France, and Japan.

Following his departure from South Africa, and during the earlier stage of his career he became associated with highly renowned groups such as Gutai and Art Informel, citing critic Michel Tapié as a pertinent influence. Produced in 1960, the free-flowing and seemingly sporadic paint splatters in Composition are indicative of the spontaneity underpinning the work of many avant-garde artists of the time. They emphasise movement and draw the viewer's eyes across the canvas, whilst simultaneously distorting expectations of what a painting is expected to be. In the piece, Coetzee elevates the work by incorporating ping-pong balls and slashing the canvas to create a greater sense of depth. This use of assemblage is reminiscent of works by contemporaries such as Lucio Fontana. By combining painting and 3-D aspects, this work highlights Coetzee’s maverick spirit, positioning him right at the forefront of developments of artistic styles.

Coetzee had his first international solo exhibition, at the Hanover Gallery, London in March 1955. The Hanover Gallery had a reputation for presenting some of the best, and most challenging modern artists of the time, such as Francis Bacon, Graham Sutherland, Alberto Giacometti, and Lucian Freud. Consequently, the exhibition helped to confirm Coetzee’s commercial ability on a global stage and solidified his reputation as an innovative figure within the art world.

A highly international artist, Coetzee has established a strong reputation outside of South Africa and his works continue to thrive on the global art market. Known for his creativity and unique approach, assemblage pieces such as Composition are amongst some of his most collectible works.

Composition is available to view in the gallery and to book an appointment please email us at stern@pissarro.com.