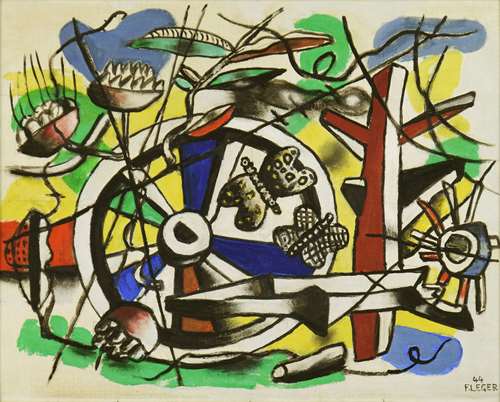 Tate Liverpool’s ‘Fernand Léger: New Times, New Pleasures’ opens on 23rd November 2018 through 17th March 2019. It will be the first major UK exhibition in thirty years devoted to Fernand Léger and features groundbreaking works such as his enormous pre-war mural ‘Essential Happiness, New Pleasures’ from 1937. Best known for his mechanical representations, the exhibition will explore the artist’s take on modern life during the mechanical age of the twentieth century. Showcasing fifty works, the exhibition examines his paintings, murals, film and textiles. The son of a Normandy farmer, Léger trained briefly as an architect before becoming a painter. As highlighted in the exhibition, he would later famously collaborate with architects such as Le Corbusier and Charlotte Perriand. After moving to Paris in 1900, his earliest works were influenced by the Impressionists, but he later embraced Cubism following Pablo Picasso and Georges Braque. The term ‘Tubism’ was coined following Léger’s success and distinctive style.

After seeing active service as a sapper in the French army’s engineering corps during the First World War, Léger was fascinated by the technological innovations that he witnessed. From 1918 to 1923 he began his important “mechanical period” featuring a range of machinery including aeroplane propellers, turbines and motors. If you are unable to make it Liverpool, at Stern Pissarro Gallery we are currently showing a rare drawing entitled ‘Composition Méchanique’ from 1918, which shows the very beginning of his mechanical explorations. Léger led the avant-garde by exploring new media such as film in tandem with his painting. His experimental 1924 film the ‘Ballet Méchanique’ will be screened at the Tate Liverpool exhibition which features a medley of 300 fleeting shots of things such as engine parts, primary shapes and fairground rides.

With the onset of World War II in 1940, Léger lived in temporary exile in America for five years. Stern Pissarro Gallery also holds 'Les Papillons dans la Roue', a painting from Léger’s early 40s period during which the artist created just one-hundred works in his nomadic state. His American works most famously feature the Rouses Point landscapes as well as his series of Cyclists and Les Plogeurs. The style from this period is characterised by tubular and geometric shapes outlined in thick black, graphic lines filled with flat planes of primary colours. Experiencing the cradle of modernity, Léger was inspired by the interplay between machinery and his natural environment as well as everyday workers.