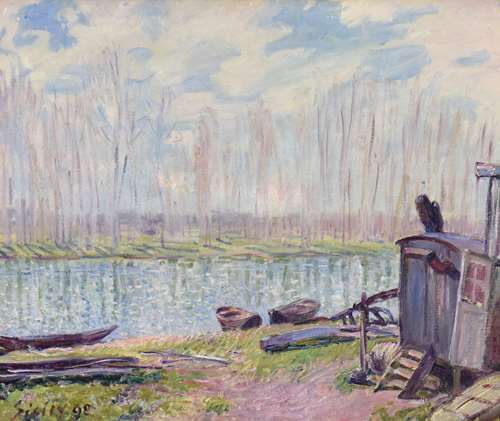 Alfred Sisley was born in 1839 in Paris to affluent British parents. In 1857, he was sent to London by his father to pursue a career in business, which he swiftly abandoned in favour of art. While in London, he became inspired by the works he saw by artists John Constable and J.M.W.Turner. Upon his return to Paris, he took up painting, training in the atelier of Swiss artist Marc-Charles-Gabriel Gleyre in 1862 alongside Monet and Renoir. Outside the studio, they discussed the Impressionist style at the Café Guerbois and worked together en plein air to capture the transient effect of natural light, a tradition that Sisley would remain faithful to throughout his life. His concentration on landscape scenes was perhaps the most consistent of all the Impressionists. In 1874, Sisley was one of thirty-one artists to display their work at the first independent Impressionist exhibition and is consequently considered to be one of the founder members of Impressionism. He also exhibited with the Impressionists in 1876, 1877 and 1882, and has his first solo exhibition in 1883 at La Vie Moderne in Paris.

Bords du Loing was executed in 1890, while Sisley was living in Moret-sur-Loing. After having worked at Louveciennes, Marly-le-Roi, Sèvres and elsewhere on the outskirts of Paris, Sisley finally settled with his family in Veneux-Nadon, a small village near Moret-sur-Loing, close to the forest of Fontainbleau in 1880. He would live here for the rest of his life and execute most of his later works in this area, moving several times between the two picturesque villages. His local landscape was a constant source of inspiration to Sisley, who painted a series of works in the 1880s and 1890s showing the banks of the Loing at different points. He was so inspired by his local scenery that in 1882, shortly after his arrival in Moret-sur-Loing, he wrote to Monet, inviting him to join him. He wrote: “Moret is just two hours journey from Paris…There is a market once a week, a pretty church, and beautiful scenery round about. If you were thinking of moving, why not come and see?” While Monet ultimately felt a greater pull to the Cote d’Azur, Sisley remained in Moret-sur-Loing, studying its landscape with care, from its medieval churches and rows of poplars to the boats floating carelessly on the Loing. The Loing, in particular, was a favourite subject of Sisley’s, as Richard Shone observed: “Sisley seemed unable for long to resist painting works in which there was water to offer its reflections, and river-banks to provide constantly changing activities. He was indefatigable in his exploration of the Loing.” Art historians agree that the gentle landscapes and changing conditions of Moret-sur-Loing had a profound effect on Sisley’s oeuvre and resulted in some of his most spectacular works. Christopher Lloyd argues that Sisley’s paintings from this period ‘show him at the height of his powers. All the experience of the previous decades was blended in these canvases, which amount to the summation of his output.’ Indeed, Sisley’s most famous works were executed in this period, including Street in Moret, The Bridge at Moret-sur-Loing and Allée des peupliers de Moret.

Although Camille Pissarro introduced Sisley to the art dealer Paul Durant-Ruel, who attempted to popularise his work, Sisley did not succeed in selling many of his works during his lifetime. He was later praised for the beauty and harmony that he brought to his compositions, as the critic Gustave Geffroy wrote in 1923, “he sought to express the harmonies that prevail, in all weathers and at every time of day, between foliage, water and sky, and he succeeded.” It was only after his death that he was considered one of the masters of Impressionist landscape, and the commercial value of his works increased significantly. Today his works are featured in several prestigious museum collections, including the Art Institute of Chicago, the Musée d’Orsay (Paris), the National Gallery (London), the Pinakothek (Munich) and the Metropolitan Museum of Art (New York).